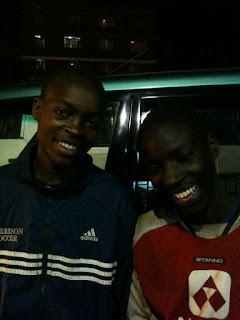 Their names are Joseph G. and Joseph M.
To friends, Joseph G. is known as Cheu (Ch - a - oo), Joseph M. is called Josantos.


They had been back on the streets for 3 weeks now, having run away from the Children's Home where they had lived for about 2 years. These boys have known too much pain in their 15 years of living. When they feel wronged, they will either fight or fly. They're well equipped to fight back, they know how to fight ---- but they didn't, they ran. Still even when we run from something that has hurt us, the marks that impacted the heart still do much damage. They had run to the streets when they were small boys, because they could not endure the beatings. They ran back to the streets because they felt mistreated.
The injustice of it all is smothering!
At least on the street they have the chance to defend themselves and fight back.
But on the street, hunger presses for survival, then fists and feet are sometimes used to rob and run. Not really a "choice", but more of a fact.

What were their options? Were there any?
What would i have done if i had been born in their place?
God help them...

We arrived early so David could scout about and inquire if either Joseph had been seen in the area. Joseph G. (nicknamed Cheu) had been seen just moments before, but had left to go buy more glue for the night. David asked the boy to give Cheu a message if he returned, "Tell him, i'm here for him, i'll be coming back to find him. Tell him to wait here. I've come for him."

Joseph M. (nicknamed Josantos) had not been seen in the area.

David came back to his three compadres and gave us the good news, "He is near, he will be back". We had again prayed on the way, we prayed silently as we walked to get a bite to eat as we waited. We could feel the intense prayer cover surrounding us --- we knew we walked in complete safety. Only God can do that. For all of you who prayed for us (and i know there were MANY) thank you, thank you, thank you -- we felt your hearts there with us as God responded with a mighty "Yes!", and the Heavenly Warriors pushed back the enemy.

About 9:00PM, David left us again headed back down the alley. We hoped Cheu had returned. We waited. Within seconds a small boy slowly approached. He looked to be about 8 or 9 yrs. old, barefoot, torn clothing, so dirty, so broken, so "wrong" ---- OH GOD THIS IS SO WRONG! As i looked in his eyes, i thought of my sons Peter and Michael --- what if their eyes looked back at me from this face, this world, this "hell". Oh God... this is all so completely wrong.
Keziah talked with him and translated for us. His name is James, he is 15 years old, he knew Isaac, and he wanted money for "food" (or glue -- glue drives the hunger pains away longer).
We talked with him for a bit, he lost interest in us,  he wanted money, not conversation. I couldn't blame him.
We walked, knowing boys would soon surround us if we kept standing still.
At 9:15 -- we met David on the street, with Cheu at his side. He looked GOOD! So good!
David shared with us later, that he had found Cheu sitting on the curb waiting for him. 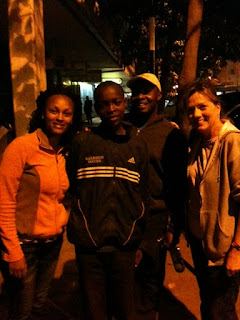 Cheu wanted to be found. He wanted someone to come for him. He wanted to be wanted. How the past 3 weeks must have haunted him, wondering if anyone would come. Wondering, does anyone care...

Cheu said he knew exactly where Josantos could be found, near Mathari. It was late, we would have to hurry, Cheu's eyes pleaded. Ten seconds later we were in the car headed to Mathari.

At Mathari, David and Cheu left their 3 praying partners in the car parked in a lot with a guard. We watched them walk into the darkness behind a building --- headed to a very unsafe place. Prayer cover was so thick around us all --- we thanked God and made our prayerful petitions again.

Minutes later Josantos bursts out of the darkness with David and Cheu close behind him. His white teeth shining, he headed straight for Steve, nothing but a hug would do for that glowing, wounded boy. Steve shot out of the car and strong arms surrounded a boy aching to be loved. He hugged us all --- you could see it in his face --- he felt loved --- he felt saved. 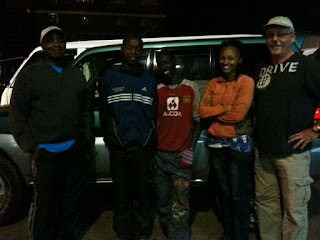 He had the wounds on his face from a beating he had taken from bigger boys. A cut under his left eye and swollen cheek with red blood vessels filling the sclera of one eye. Glue in his back pocket and a glove on one hand, he looked like a child that had survived a war.
I wish you could have been there with us --- to feel the glowing light that surrounded us in that dark lot. These boys had not become hardened yet --- they were thrilled that someone had finally come for them. So happy to take pictures, they wanted it recorded, proof, they were loved, someone cared, they would not have to run in the streets that night.
We asked Josantos what he had in his back pocket, he shyly looked down. Then pulled his glue bottle from his pocket and threw it into the darkness. Cheu followed suit. Two saved boys --- two glue bottles thrown back into the blackness that borders "hell".

Nairobi is a city with over 5 million people covering an area of around 300 square miles. Make no mistake, a miracle happened tonight. Two boys who survived by hiding in the shadows have been found, plucked from the pit, saved by the Savior. These boys had been most certainly claimed by the enemy, they were in his territory suffering under his hand --- they were defeated. But God... God heard prayers, God prepared the way. The city bowels were ruptured and two have stepped back out into the Light.

As we rode along towards Moses Children's Home, David inquired of the boys how they were and what had happened to them. Cheu spoke little, but Josantos shared his nightmare. On Tuesday (3 days earlier), on the night Steve and i had landed in Nairobi, one of his friends had been wrongfully accused of stealing. The boy was attacked by a mob and stoned. Not fully dead yet, the mob set him on fire and left him to die slowly on the dirty, stone covered street.
Munyiri was his name. He was a boy -- with a heart --- and a soul --- and a mind.

Josantos and some friends realized the boy was still alive and carried him in their arms to the hospital. The boy died shortly after they arrived. The next day, big street boys had attacked Josantos. His face showed the marks.
Josantos knew how very badly he had needed to be rescued. Perhaps that is why he glowed as he burst out of the darkness, running to Steve's ready arms. Oh God... 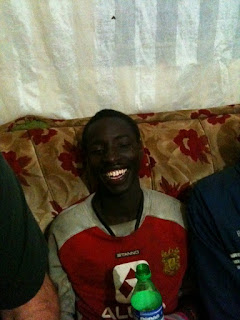 We asked if they were hungry. Cheu was not, Josantos yes. Never have i felt so emotional stepping into a KFC. Chicken and fries would fill his stomach. God, will you please fill everything else that is empty? Thank you God, i know that is in your plans, why else would you have sent us, why else would you have allowed us to find him. Please God, soften what is surely hard inside these boys, bring them to the place where they can feel your love for them. May these two grow up into men who rescue others and walk with You.

We talked of the future, they shared bits of their past. We asked what they dreamed of in the days ahead, they had an answer; hope had not been drained from them. Cheu wants to be a pilot. Josantos wants to learn a trade like woodworking. Hope is an amazing healer. Just 3 days ago he carried a stoned, burned friend in his arms; tonight he dreams of a future. 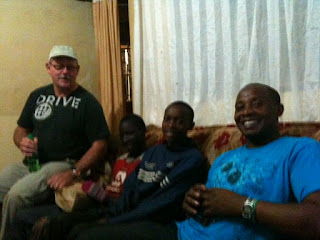 Father God, will you meet these boys in ways that are beyond what we could imagine. Will you protect them fiercely please --- please never allow another hand of violence or hate to come near them. Heal their broken, secret places and overwhelm them with your love for them. Meet them in their dreams, the ones they will have at night and the ones they hold in their hearts during the daytime. Father God, may the schemes and plans of the enemy to devour them be defeated and instead may Cheu and Josantos be covered by you --- overhead, underfoot, behind, before, to the left and the right. May they be nurtured by you; may they grow into mighty men of God that make a powerful difference in this world. As they sleep tonight, please meet them. Transform what must be changed, grow what is stunted, provide what is needed, touch them in such a way that the lack of love from those who should have loved and cared for them is no longer a wound in their soul. But instead may they be so filled with Your love and presence, that they feel no loss or lack. I ask this of you God, because you are God, only you are able to do this. May your Kingdom increase and your Name be glorified in the redeeming story of the years ahead for Cheu, Josantos, and Isaac. We ask all this in Jesus' Name.
Amen

Amazing Grace, how sweet the sound --- they once were lost, but now they are found.
Thank you God!

Then he calls his friends and neighbors together and says, ‘Rejoice with me; I have found my lost sheep.’  Luke 15:6

But we had to celebrate and be glad, because this brother of yours was dead and is alive again; he was lost and is found.’”  Luke 15:32


©2012 Donna Taylor/Reaching for the Robe