His Water - my thirst 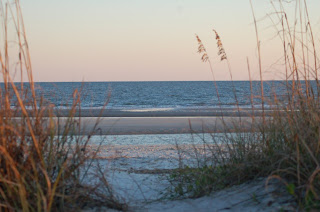 A week at the ocean, walking on the shore, listening to the waves, feeling the "rightness" in the mighty rhythm  ------- feeds the soul. It's a peaceful, powerful sort of gift --- what the ocean can give to the person needing to receive what can not be found among those that breath air.
The mighty ocean, it's a picture of our Lord.
And we ----- we are the sandy shore ---- always needing one more touch from its waves.

We stand so dry and crisp, so thirsty. We need the life that comes from the life giving depths.
And so the Lord gives Himself to us, freely, steadily, eagerly, relentlessly. It's all so disproportionate: His power, our weakness - His vastness, our minuteness - His greatness, our smallness - His fullness, our empty need...

Without the life-giving water, we are blown about by the wind having no solid footing to hold ourselves steady. Blown from one dune to the next, unable to resist the relentless winds, with no moist ocean water to hold us steady, we can so quickly be lost.

Waves. They are relentless. They caress and stroke the shoreline with a unwavering "giving". It's as if the shoreline is helpless and unable to move from its lifeless place. So, mercifully, the ocean water's bring life to it. Most often the waves on the sandy shores are gentle and methodical. That's the way my Abba pours Himself in to me each day --- it's gentle, unwavering, methodical, and life-giving.
But there are times when the waves beat down --- they become painfully serious. I've felt that from my Father as well. When i lacked focus or willingness to listen, when i allowed other things or other voices to have my ear ---- the "waves" will become intense, they should, they must, too much would be lost if they didn't. 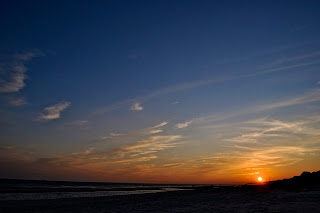 The ocean waves never sleep. They don't grow weary and rest from exhaustion. They give, they pour out themselves, they offer watery life to the crusty, dry shoreline ---- day and night, whether their goodness is witnessed or not, the waves never stop their steady life-giving work. That's my Jehovah, always giving, pouring out Himself, offering life.

It's too mighty to get our minds around, its supply of water is unfathomable, it reflects the huge sky above it and is not intimidated by the billions of stars that dance over it each night. The moon and sun seem to play around it, playing chase in the vast blueness above. It's big and powerful and uncontrolled --- yet it is ever giving of itself to the endless shorelines.

The porpoise at play has fully given itself over to the waters. She glistens when she erupts from the waves for a brief moment and the sun shines on her ocean soaked skin. Do i? Do we? Have we given ourselves over completely to the greatness of our God? ---  do we glisten of His goodness? Oh if my walk with God could mimic the joy of a porpoise at play.

A week at the ocean --- stirs me to a deeper longing for more of it's Creator.
A very good way to begin a New Year.

Genesis 1:12 "So God created the great creatures of the sea and every living thing with which the water teems and that moves about in it, according to their kinds, and every winged bird according to its kind. And God saw that it was good."

Jeremiah 2:13 “My people have committed two sins: They have forsaken me, the spring of living water, and have dug their own cisterns, broken cisterns that cannot hold water."

John 4:10 "Jesus answered her, 'If you knew the gift of God and who it is that asks you for a drink, you would have asked him and he would have given you living water.' "

Revelation 7:17 "‘He (the Shepherd) will lead them to springs of living water.’ ‘And God will wipe away every tear from their eyes.’ ”


©2012 Donna Taylor/Reaching for the Robe