David found Isaac who is now with Moses - God's Men 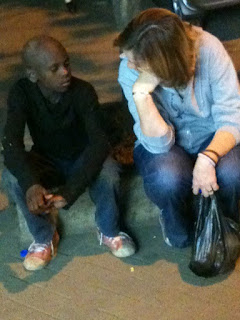 For the years I’ve been in Kenya, I’ve been very intentional to be indoors before dark arrived.
But last night (Wednesday), we left at dark, went out from the security of a well lit room and walked into the night ---- following the Light. We knew what was needed, and we understood our part.
Isaac, Joseph M. and Joseph G. were back on the Nairobi streets, waiting for the night to become black enough to dig through dumpsters for food. They sleep in the day, hiding from the eyes of the police, they roam at night looking for ways to survive. They “miss” the Light, they move about in the Dark.

I prayed hard before we left, we prayed together on the way. We knew FULLY our inability – we embraced completely the ability of the One who loves them most. It’s a tender, tedious place to willingly sit in, a place that should not be orchestrated by “men” but one that should be responded to when God stirs.

I’ve always been warned concerning the streets of Nairobi, after dark, for a mzungu (white person). Even our Kenyan friends, David and Keziah were cautious. But we knew the potential ---- both good and bad. If we did not go and search for the boys – they might be lost to Light and Love. We did not suppose to “save them”. Rather we were overwhelmed with the deep knowing --- they needed to be found and the Savior was sending us to do just that.

When we arrived, David parked the car in a well lit area. We walked down the street, the four of us (the four of us that could be seen with human eyes). But even as we walked in silence, I prayed and asked God, “How many unseen warriors have you posted over us dear God?” I knew they were there. I could feel them breathing on my shoulder. There was peace. Thankful for the scriptures cemented in my mind that have sharpened my sword, I spoke them, I talked with my Fortress, I hid in the cleft of the Rock, I spoke His Words to Him, and walked towards the dark to find precious boys held in claws.
This is not what Steve and I feel called to do in Kenya. We are ill prepared for this kind of work. We had been in meetings all day long to help prepare the way for the work we know we are called to do. But this, this “work”, this was orchestrated by God. It had been whispered in dreams to David the night before. It would be a foolish thing to choose this path on our own. But this was not a path we had designed. Likewise, it would be a foolish thing to ignore God’s clear lighting of this path before us. Too much could and would be lost if we ignored His soul whispers to us. We were hungry for the possibilities that can be felt when we listen and obey.

We came to a street corner. David said this was where the boys would begin to appear when the day was fully gone. He told Keziah, Steve and I to walk the blocks around this corner while he, alone, went down the alleyways to places he knew the boys would be hiding. David knows where they hide, he use to hide there himself. David knows the importance of finding and rescuing them, he too was found and rescued. David knows the death that hangs over the street boys, he was saved by the Savior, pulled from the pit, escorted from death to life ---- he knows what it feels like to have gentle hands reach to hold dirty hands and put good food in hungry stomachs. He uses what he knows to find them.

We, the pretty Kenyan lady and two wzungu (white people) walked, hands in pockets, praying, seeking. I felt my Father beside me and behind me. I have never felt safer in my life. We walked for about 45 minutes, circling streets, dodging people, stepping into darkness, praying.
We walked by many street children ---- painful air surrounds them and pierces my soul. One, likely only about 3 or 4 years old --- such a beautiful, broken child ---- it was gut wrenching to walk past him. Oh God… Oh God… forgive me for walking on…

Two more blocks of walking. Heavy steps. A heavy heart. And then we saw them, David walking towards us with a very timid Isaac beside him. Oh God…

Isaac, with those big eyes, frantically watched every movement of every person within 20 feet of him. Frightened, hard, hurt eyes watching and wondering. He did not smile, he did not even look at us. He was a bundle of emotions all held within an exterior of stone. We greeted him, hugged him, patted his shoulders as we spoke to him, he looked down. No words. I asked if he remembered us, he nodded yes. David asked him what our names were, he meekly said, “donna and steve taylor”. It was as if he was a different boy inside the dirty body of the Isaac we knew. His eyes were cold, his body language was hard and distant. The Isaac we knew, laughed quickly with twinkling eyes. And I realized, this is what a child looks like when they have claws of evil dug into their back. I could feel the struggle swirling between Light and darkness --- good and evil ---- White Warriors and hell’s hounds. It was a tangible, real presence. I sharpened my Sword by rolling the scriptures around in my mind and whispering aloud “God help us”. 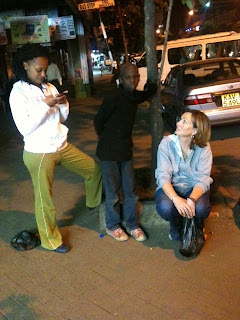 Isaac was distant, and seemed to want to stay that way. He said, “no” when we asked if he would like to come with us. He was drugged, he could not really know what he was saying. But force him to come --- we could not do that. So we lingered and took turns loving him with our words ---- and surrounding him with prayers. Steve bought him half a chicken and a water, we sat in strained conversation as he persisted that he would not come back with us to Tumaini. He did not like the teachers there, he felt they were unfair to him and the other street boys. Keziah offered that her uncle Moses had a place in Nairobi for street boys, a safe home, where Isaac would be understood and helped. He would be given time to transition from the street life to a healthy life, he would be loved and supported as he rehabilitated and left drugs behind him. He persisted with his response of “no”.
“God help us, God soften him, God intervene, God have your way - i know you sent us for him, God help us.”

I talked with Isaac in very simple, methodical ways ---- as a mother would talk to her wounded child. Isaac is fourteen, but he looks more like ten. I explained to Isaac that the decision he made tonight would effect the rest of his days. He was at a crossroads. I helped him look at the possibilities of life 20 years from now. If he chose the street life, he would know pain, suffering, drugged nights and dark days. He would likely not live to see his 30th birthday. If he chose to come with us, and give Moses (and God) a chance, there was Hope. Hope for a life like David now has; an education, a family, a happy life with a healthy body and mind. Isaac looked at me long and hard --- there was silence. I let him think (and prayed against the effects of the drugs distorting his ability to do so.)

David took his hand and talked long in Swahili.

Then, God moved. David took Isaac’s hand and we all began walking down the street towards the car. Keziah, Steve and I followed behind big David and tiny Isaac not knowing what was happening --- but praying. David knew what he was doing, God's hand was on him.

David unlocked the car, Isaac got in, we followed their lead. And then we were driving down the road, with Isaac beside us, quiet, reserved, weary to his little bones. David called Isaac’s mother and handed Isaac the phone, he talked with her reservedly. Steve called our Maggie, she knew Isaac well and loved him much (Peter was still in school so we could not call him). Isaac had perked up each time we mentioned Maggie and Peter, so we thought he might be encouraged to talk with her. It was sweet to hear her muffled voice in his ears and hear his timid, shy responses to her flood of happy words. God was comforting him ---- we could feel it. He handed the phone to me, laid his head back on the seat and closed his eyes.

We arrived at Moses home for children. Isaac was greeted warmly by Moses and the boys at the home. When we walked in the room --- I could feel it. Their eyes seem to “recognize” Isaac. They knew where he had been, they knew how he felt, they knew what needed to happen next, they knew how to give Isaac a chance. They were fully prepared to help him breathe in and breathe out and make it through from where he now stood to where he needed to go ---- hope was present. 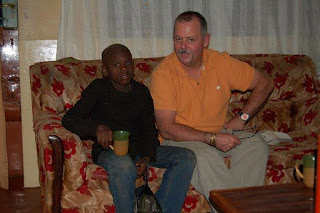 I expected them to hand him a bar of soap and a towel ----- he was a filthy boy after all. But no --- I was floored at what happened next. These kind, reformed, street boys, with such warm gentle eyes, told Isaac to take of his shoes and hop in bed. These big boys slept two to a bed, fully clothed, on top of the covers. On the street, they sleep in piles (for warmth). So here, they sleep together for warmth and reassurance --- reassurance that they are not alone. One big guy patted his top bunk bed and said, “come on man, you’ll be fine now, just go to sleep, it’s ok”.

The perfect words, a safe place.

I could almost smell the scent of the Robes I had been clinging to ----- as I stood in that room surrounded by the aroma of dirty, good, peaceful warrior boys. Boys who have felt immense evil, just before they had walked into the Light and found Love. They had the roadmap for Isaac. And Moses was ready to help him put one foot in front of the other. 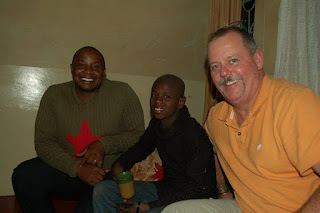 He rescued me from my powerful enemy, from my foes, who were too strong for me. 2 Samuel 22:18

In your distress you called and I rescued you, I answered you out of a thundercloud...   Psalm 81:7a

He sent out his word and healed them; he rescued them from the grave.  Psalm 107:20

Be alert and of sober mind. Your enemy the devil prowls around like a roaring lion looking for someone to devour.  1 Peter 5:8

He rescues and he saves; he performs signs and wonders in the heavens and on the earth. He has rescued Daniel (and Isaac) from the power of the lions.”  Daniel 6:27

For he has rescued us from the dominion of darkness and brought us into the kingdom of the Son he loves...  Colossians 1:13

Photos taken by Steve and me in Nairobi.