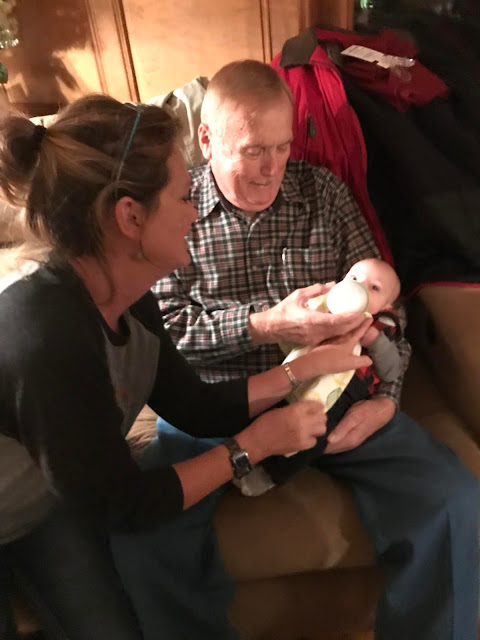 I've always loved the image of an older person walking with a young toddler. Neither of them are rushing. The former has learned the value of slowing down. The latter has not yet learned how to go quickly.
Let yourself picture it. They're both looking down, they each have a feebleness to their gait. When one looks at the other, they each smile. They neither really focus on where they are going, but they both are just enjoying not being alone. Melts me as I picture it.
Their pace is perfectly matched yet from two different perspectives. And in their slow walk together the young one has a chance to learn. The elder one feels the gift of being needed.They bring much to each other. They laugh and look and bend down low to see something that would have been missed if either had been in a hurry.

It's been just such a walk that i've experienced. Left alone, I would have only seen a troublesome pebble. But walking beside the One who was willing to keep a slower pace, Holy moments have shown up and i've learned.... I can better see the diamond in the rough.... i've learned.

Most all my life, regardless of my age, i've felt like a “toddler”. It's not that I feel perpetually 2 years old, it's only that I embrace the sense of “there's so much I don't know, there's so much still to learn”. Somehow my heart and mind have a propensity to look for the wiser, older, kinder, stronger, slower paced, sparkling “teachers”. Some might be bored senseless over it, but there's nothing more entertaining or intriguing than wise words and timeless stories told by someone who has lived well and out lasted life's storms. To say it's fascinating is an understatement.

In retrospect, there are also few conversations sadder than those with an old person who has not lived well, not learned much, and left a trail of void in their wake. So to be clear, not all older people can be counted as wise. The overflow of their life will determine how much they should be heard. Another way to say it is, look at the result of their choices in life before listening to their stories and trying to learn from their example. Perhaps that seems obvious, but, it's worth clarifying. Because there are too many people who think they earn a badge simply because they've lived several decades. And we're surrounded by a world of young people who have been wounded by older people who were not good to them. Sadly, there are those images in their minds of being the toddler walking beside the older person being drug along in rushed, harsh ways ------ there were no gentle moments of kind-paced-living. Those are some of the most wounded adults around us. When an older person is harsh with a child, it breaks much.

That being said ------- when we find a wonderful old soul who has lived well, we are wise to scoot up our chairs and listen close. Wisdom compels us to walk at their pace for as long as they will let us.

I'm thinking it's part of the Maker's plan. After all, He is the One who decided we would be born as babies and grow towards being old. He could have chosen the opposite. We could have been born wrinkly and old only to progress towards youth. Certainly if that had been the course of life, we would appreciate the health and energy of youth much more. But why is it that all too often we don't embrace the pace and wisdom of the wise elderly souls among us? Do we? Perhaps you do. I hope so. Still, it's fair to say, that all too often they seem to be swept to the side, and viewed through rushed lenses and can't-you-go-faster sort of ways.

Did you catch that last sentence? Too often we view the elderly through “rushed lenses”. The very mannerisms that wound a toddler will also wound the older souls.

Sitting in the airport is one of the best places to “see” things a bit more clearly. Perhaps it can happen because we don't actually know the people we're watching. If we'll try, we have a chance to see much about them without knowing any of the details of their life. The way they interact, the look on their faces, the way they sit. And i've learned something in my non-judgmental observations. It's the toddlers and the elderly that are the-most-beautiful-people. Certainly, there are many kind-souls found among the people in between the young and the old. But casual observations have repeatedly conveyed to me ----- the one's who know they have no control over their setting, are the one's who are the gentlest and kindest. The toddler being held in her daddy's arms is not rushing or worried, she's holding her stuffed animal and looking at the passing faces. She's literally looking to see if anyone sees her. When she notices my smiling eyes are on her, she smiles the-most-peace-filled-response. Her good daddy didn't know his girl was scattering gifts as they rushed to their gate. I needed her precious smile. She gave it with perfection.
Just after them came two old people in wheelchairs being pushed along by airport attendants. It was a him and her duo with flowing robes and a red dot painted on their foreheads. I instantly knew they believed differently than me in their souls, but still I was watching for something. They were quiet in their wheelchair procession. Again, just like the little girl being carried by here daddy, these two were also being cared for by others. They didn't have to rush or worry ----- someone else was doing the work for them. That's a major factor not to be overlooked. Still, as their loaded down wheelchairs passed in front of my gate, the lady turned her kind face in my direction and gave me a smile that was a faint whisper of my sweet grandmother's sparkle. My responding smile brought a broad smile across her aged skin and right there ---- in the wild rush of people ---- she and I felt the touch of “goodness”.

And nothing that happened the rest of that day was as beautiful as those two “touches”.

If I had looked for a smile from the 40 something year old lady sitting across from me, I would possibly still be waiting. Oh i'm not slamming her. It's just that, somehow too many of us get off the good course in the years between learning-to-walk and no-longer-able-to. We lose something so valuable.

Maybe it's only me...... maybe i'm the only one who notices all that I seem to inherently overlook. If so, then this writing is only of value in that now you all know ---- i'm finally seeing what you've known all along.

But the sharing of it can still be of value I hope. Because as I walk down the street in most any place, it's always the little and the old that seem to know the most. There are no words exchanged usually, only a nod, a smile, and a kindness given. The world misses it so often. I've missed it for too long.

When lonely is stalking about, it'll be the little carefree toddler (who is being cared for by loving parents) who, without a word, reaches clear through the wall of lonely and shifts things.
When worry is breathing down a tired backbone, it'll be the elderly soul (who has lived well and passed through much) who, without even an ounce of power, can give a short string of solid-rock words that strengthen marrow and broaden shoulders. Sometimes they can do it with just a nod and a knowing look. It's an amazing gift from “the One who rides across the heavens to help us, across the skies in majestic splendor”. (Deut. 33:26) And catch this --- whether they know He is using them or not --- HE still will. (If God could make a donkey talk.......... He can flow through anyone.)

Then I sit in the quiet and ponder --- studying it --- as if i'm preparing for a final exam not on my calendar. And i see something tucked inside of value to my soul.

It's a whispering from the Good One. He will speak to His children who are still enough to remember who HE is and all that they are not.

Oh good Lord.
It's so very true.
You are ever willing to carry me as if i'm a toddler in your good-Daddy arms. You will carry me the full distance, I need only to stop squirming and worrying and fretting. Too often i've forced you to sit me down in my unruly lack of trust or refusal to let you h-o-l-d m-e. Oh God i'm seeing. I'm learning, The picture of the smiling toddler in her good-daddy's arms IS the picture You desire for You and me. Always.
I'm held.
You know the way.
And I can look around at all that we pass ---- giving to others a spark of the goodness that comes from being held by You.

And the elderly ones being pushed along in the wheelchairs, glowing over the knowing that others have the work of getting them to their gates ----- that's suppose to be “us” too isn't it Lord?
You are willing to let me rest while your walk with me through the hills and valleys of this life. You will do the work, I only need to remain in the seat you give me. I'm not doing “nothing”, but i'm not doing it all. You are. I can rest in Your presence. I can not rest apart from it. It's the lovely picture of “Be still and know that I AM GOD.” (Psalm 46:10)
Whether I like the chair where you've placed me or not is where so often the s-t-r-u-g-g-l-e begins.
As if I know something more than you do.
The toddler doesn't question --- she's not asking her daddy if he's sure he knows what he's doing. She actually won't even notice if he messes up. She just rides along in his arms.
Forgive me for being a squirming one.
To trust that You will carry me is either a truth in my life or not ----- and I need to quit faking it if it is not. Likewise, I need to rest in it if it is the Truth. I cause so many problems with my squirming thoughts.

We grown-up kids seem to think we are able to do something of value.
But if we're not being carried by the Good-Daddy-God ----- we're destined to mess up whatever we think we can do. Mess up in the sense of ---- it'll only be base-line acceptable at best. But it won't be touched by the Holy One who will bring the excellence – the goodness – the i-never-imagined-that-was-possible essence to whatever we're putting hand to.
It'll be sufficient, maybe, but it won't be what it could have been.

The toddler's smile went to a secret place in my soul, as did the elderly ladies.
They trusted that they were being c-a-r-r-i-e-d, they were not worried over the details, they were able to see and do much from their cared-for-perch. 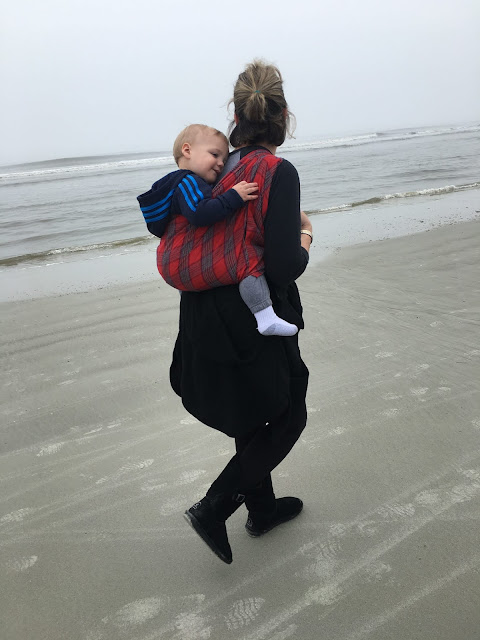 Posted by Donna Taylor at 2:15 AM No comments: