God has His hand on the skein of me... 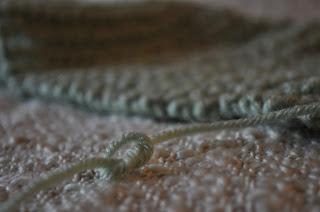 We'd sit quietly in her small, poorly lit receiving room. But for this little girl, there was "light a-plenty" --- it sort of spilled out of her. Colorful skeins of yarn resting in a basket nearby, she had chosen the one she wanted to transform, the one that would soon become a blanket wrapped around a baby not yet born. Her hand would reach and choose, my child-heart would always feel a bit sad for those left in the basket. They were destined to remain skeins in a basket. At least for a few more days.

Perhaps it's just the way i remember it, perhaps it wasn't this way at all. But God in His goodness allows me to remember in ways that let Him teach me today through moments long gone by.

My mind's eye remembers how she was always busy, always working away at a long daily list of tasks, but with no written checklist in front of her. Biscuits and cornbread in the oven before sunrise. Chickens to "tend", gardening to do, clothes to wash, floors to sweep. Meals to prepare, clothes to take in off the line and fold, beets to boil or peanuts to pick or corn to shuck, on and on and on. But on wintry days, when we'd find more to do "indoors", those were the days she was most likely to choose a pretty skein of yarn and scoot my chair up close to hers.

I would hold the skein in my tiny hands, feeling as if my job was of greatest value to her. She would methodically pull the yarn from the center of the skein and gently roll it round and round into a ball. Only when she was about to transform the yarn would she reform the skein into a neat, tidy ball. I thought nothing of the simple, peaceful task during those childhood days. But now full grown and listening more closely ---- i see the lesson God had for me in the workings of her hands.

We'd sit there quietly. I liked it best when no television or radio played. Just the sound of our breathing and the feel of belonging. For those moments always, i felt needed, wanted. She surely could have done it without me. Her many knittings proved she had succeeded often on her own. But she made me feel like it mattered that i was with her; as if her work was made easier by my busy little hands. I remember well.

The moments i remember hold visual lessons for today ----- as God has His hand on the skein of me.

Pulling the yarn from the center of the skein went smoothly and easily as long as no knot formed inside the roll. But from time to time, it would feel to my hands as if the skein almost belched when a wad of yarn would come from its center. Her hands would take hold of the knotted section and work it carefully until it lay unsnarled in her lap. Quickly she would roll it all into the neat ball forming in her hands. The knot straightened, peaceful work could continue.
But ---- if she had not paused to straighten the kink, what would have happened?
She would have had a mangled mess rolled tightly within her yarn ball --- which would have altered the shape of the sphere in her hand, it would have bulged.
And perhaps even more important, she would have to face the knotted wad of yarn again when her tedious knitting inevitably brought her once again to the snag. Hiding the mess would not make it go away. Out of sight might allow out of mind ---- until she came to that knot again --- and she would if she ever wanted to make something useful with the yarn.

Another option, she could have laid the warped ball of yarn, distended by its unattended, mangled sections in her "someday" basket. She could have left it for someone else to deal with, while she chose another less tedious and tangled skein for her next knitting endeavor. She could have avoided the "mess" and moved on. But --- she didn't. I watched.

Sad it is when we toss to the side, the knotted messes that could be straightened if we were willing to pause long enough to gently untangle them. Sadder still, is when we leave it to others to try and deal with the mess left behind us. It should never be.

How do you do it Lord? How do you bring to mind memories long past, and use them to teach me today what i did not fully see then?
I hear your whispers Lord in my soul --- i see what i could not have seen on my own.
Her hands represented You Lord, and the steady, methodical, peaceful work you do on me, on us.
My tiny little girl hands represented the hands of the many You send into our lives to "help" us, to hold us, to assist YOU while You transform us from what we were in the "basket" to what You have seen us as all along. We see ourselves as just another "skein of yarn" in a basket beside many others. Sometimes we find ourselves at the top of the heap, and then everything shifts and we feel as if we've been moved to the bottom most corner of the basket. We are the yarn --- in Your hands. You choose when we are lifted up, and pulled apart, and reformed, and made knew. You know when and how and why and for what purposes. You know, You can...

You pull us gently from where we were. You reform us initially into something You can more easily work with. You form us into a ball that will easily roll and glide ---- wherever Your working hands need us to go. Skeins only roll in one direction --- not so with a nice round ball.
And as You pull us from the very center of ourselves, sometimes knots emerge.
Tangled messes sometimes resulting from careless handling of others.
Sometimes knots form when pressure is applied.
But sometimes knots were there all along, and if the skein had never been touched by Your hand, they might not have shown up. But You knew they were there, You knew they needed to be untangled. 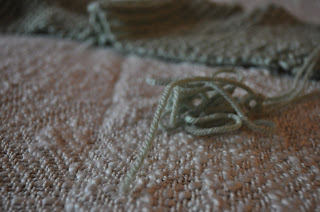 And You Lord, like her with her yarn, would never ignore a tangle emerging from us.
You would never choose to conceal it quickly in the newly formed ball.
You know the bulge will deform us from what we could be.
You know the knot will have to be dealt with for Your transformation to carry us fully from what we were to what You see us becoming in Your hands.

You choose us. You will untangle us. You lovingly touch every inch of us ---- with hands of One who knows the potential in a willing skein of mess.

She never became angry with the knots that emerged.
Neither do you Lord.
You never become angry with all that needs to be cared for in us.
Attention is given --- grace --- gentleness.

We may become frustrated with ourselves.
We may want desperately to hide the snarled tangles.
We may think the bottom of the basket was a more comfortable place to be.

But when we begin to get a glimpse of what You can transform us into ---- we long for Your hands to find all the knots. Your hands. And we realize we are just as incapable of "fixing" ourselves as the strand of yarn. We need Your hands to touch us, help us, and make us knew.

The skein became a ball with time and patience.
The ball became a blanket with skill and vision.

... and for the knot(s) you straightened in me this last week, and the week before, and the week before that --- oh how i do thank you...
i would have huddled in the bottom corner of the basket surrounded by other skeins. i would have worked to keep my wadded messes concealed. But then Your hand came near the skein of me, and Your work began...
Untangling knots hurts. Ignoring them hurts worse. But in Your hands, suffering produces perseverance, perseverance brings about character, and character gives birth to Hope.

All from unspoken lessons sitting beside her in a dimly lit room... and a quiet reminder in my soul... 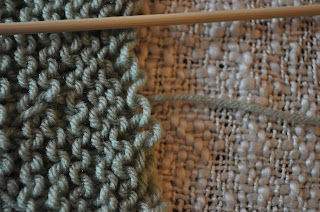 "...we also glory in our sufferings, because we know that suffering produces perseverance; perseverance, character; and character, hope. And hope does not put us to shame, because God’s love has been poured out into our hearts through the Holy Spirit, who has been given to us." Romans 5:3-5

©2013 Donna Taylor/Reaching for the Robe