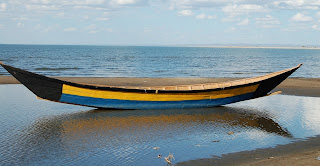 His days had been beside his boys. Strong sons, what every man hoped for; sons that would be called Boanerges, meaning Sons of Thunder (Mark 3:17). As these two had grown from boys into men, he had come to know them as working companions and possibly even friends. They could haul in the catch, dry the nets, and prepare the boat for the next day's work; they understood working with their hands and providing for their family.  Zebedee had seen many days on the water with them.
The dry salty smell of the wooden fisherman's rig smelled like home to the father and
sons. They knew how to read the water, the breeze, the weather, and each other. His
sons had grown up watching him, learning. They knew what their father wanted
before words were spoken. Years of silent work does that.  He'd trained them since they could walk ---- fishermen know how to raise fishermen --- it puts food on the table, coin in the purse,
and companionship in the boat.

Today, the fishing had been just like every other day. Nets hauled in the needed
amount, his sons' laughter in the air, winds blew in expected ways, the sun
followed its familiar path. But as their boat touched shore, familiar faded.
Did Zebedee know the Nazarene who called out to his sons?

The stranger, the one who had been teaching nearby called out to James and John.
Was he looking to buy fresh fish? Was this wandering teacher hungry?
Then the words came clear to his old ears.
"Follow me..."

..."Following him means leaving me..." --- the thought must have surely rolled through the old fisherman's mind.
And just as the understanding fell on his heart ---  James and John immediately went.
They left.
They stepped away from the world they had always known, from what they were
comfortable doing, from the place of nets and fish and family and father ----- and they
followed the one who called them.

"and they left their father Zebedee in the boat with the hired men and followed him..."

Did the hearts of sons and father and mother and others feel as if a cyclone had blown
in from the sea that day?
In moments ---- everything changed.

He backed his shiny black truck into our drive. Positioning the trailer outside the garage doors. Is it possible he is a living example today of how Zebedee himself reacted when the Nazarene called out to his sons.
He helped as we filled his truck and trailer with the few treasures we hold dear to our
hearts but can no longer  be kept close. We talked lightly as we strapped in tubs filled with
age old quilts stitched by great-grandmothers hands, and baby shoes worn by our little ones, and wedding pictures tucked in beside grandfather's glasses, and the baby bed that held each of our babies each night as they slept -- (what a blessed piece of furniture indeed). Then we headed to his house, where mom waited for our arrival. We did not let ourselves melt --- on the outside.
Mom worked at it, she didn't want to make it harder.
And just that same morning Steve's father had walked through our home -- we had asked all the family to come to choose something for themselves --- from all the things we can no longer keep, we wanted to share with family first. He too had held back tears. Zebedee would understand.
Did Zebedee's wife feel the same when her net bearing husband arrived back home
that day, without sons beside him?
Mom had prepared a wide open space in their home for the stored wedding dress and baby bed
and dearly loved quilts. The men worked unloading, we ladies talked...
There's a great joy and deep sadness ---- He has called, we will leave...

What did Zebedee say when he walked in the house that evening?

Hearts mattered then too.
But what mattered most of all???
This -----

Obedience can cost much ----- valuable things always do.

Obedience requires something of everyone near ----and God sees it all.


We are watching our parents surrender and obey and bless and trust ----- and we pause much longer now when we read "They were in a boat with their father Zebedee, preparing their nets.
Jesus
called them,
and immediately they left the boat and their father and followed him."


"As Jesus was walking beside the Sea of Galilee, he saw two brothers, Simon called
Peter and his brother Andrew. They were casting a net into the lake, for they were
fishermen. “Come, follow me,” Jesus said, “and I will send you out to fish for people.” At once they left their nets and followed him.
Going on from there, he saw two other brothers, James son of Zebedee and his
brother John. They were in a boat with their father Zebedee, preparing their nets. Jesus
called them, and immediately they left the boat and their father and followed him."
Matthew 4:18-22

"When he had gone a little farther, he saw James son of Zebedee and his brother
John in a boat, preparing their nets. 20 Without delay he called them, and they left their
father Zebedee in the boat with the hired men and followed him."
Mark 1:19-20