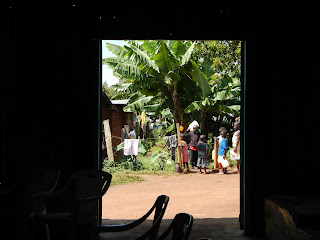 He was standing between bushes on the side of the mud road. It would be better described as a narrow mud trail. His clothes, old and frayed, were almost the same color as his skin, like perfect milk chocolate. His smile. It glowed. Tiny and barefooted, he stood there alone, but he knew how to welcome someone.
He waved loudly, I waved back and smiled --- trying to match the glowing smile on his tiny face. But then I noticed the twitch of his eyes. His whole forehead jerked as muscles in his eyelids moved in abnormal ways. My mother-heart jumped ---- but then we were past him ---- and I whispered to Abba.

We were on our way to speak at a Pastor's Conference. Several dozen men were expecting us; we had been asked to encourage them on unity and reconciliation.
We were almost there, the Pastor's were gathering, but we were “watching” for the arrival of the Holy Spirit. For in truth, we wake daily knowing, only what Abba says through us will be worthy. We had prayed and read and prepared ourselves as best we could ---- but we live with the keen understanding, we are clay vessels ---- vessels that are only valuable because of what we hold inside. So we look for the daily refilling, we ask for the overflow, we watch for the Holy One to pour Himself through. We were eager for what He would give, He knows what is needed, He just watches for which mouths will open for His Words. After all, how could we possibly know what another stands needing to hear? We can not know what Abba is doing in the life of another ---- but we can open our mouths to let His Life and Truth and Light flow. Amazingly, we so often do not even know what was said that helped them ---- even though we witness the flow. For it's one of the wonderful mysteries ---- God among us, ministering and delivering what is needed, if we remain obedient to just show up.

We drove on through the mud trail and finally arrived at the church. Children were the first to greet us – it's most always that way here. Ladies waved from a distance, but children were all around. Barefoot, beautiful, glowing in the morning light, they watched after each other and reached with eager timidity to shake our hands and greet us with, “How are you?” (said with the most lovely accent and always inflection on the “you”). And then sliding into the mix of them, was the little guy from the bushes. His smile captivated. All their smiles do. They are unhindered by the mud between their toes or the tears in the clothes ---- they were open and excited --- they had someone to welcome, they shined with something so much more lovely than gold.

As we shook hands and giggled together, we were thankful for the gentle way God was easing our nerves with His little ones. We never stand to teach with a gloating confidence ---- we are always willing, but always a bit unnerved. It takes obedience and attention to not allow human flesh to hinder the flow of God. Any pitcher meant to carry good, clean water ----- needs to be scrubbed clean itself. The children were ministering to us with their eager goodness. So often the smallest among us do the most good.

But I noticed the eye spasms of the first little boy. They had increased. Between each muscle twitch his eyes would almost close. It was disturbing to watch. The mother in me wanted to load him up and take him to the nearest doctor. But it is most important to show respect for the adults around him first, to see what others have already done.

As we met with others during the morning, and sipped Kenyan tea before we were to begin the first session, the children lingered near, including the little boy with the twitching eyes. I learned that just the day before a medical clinic had taken place at this very church. Hundreds had come and been cared for by a team of Kenyan doctors and nurses. An American team had raised funds for the clinic and provided meds to be administered. Ministry at its best, in my opinion, many working together for the good of those in need. Unity ---- with a focus ---- that blesses outward. So I asked if the little fellow had been seen by the doctors, did they know what was wrong with his eyes? The kind lady said he probably had not been seen, the doctors only attended to those who stood in line to see them, and there had been a long line all day. But why had no one stood in line with him I asked. I thought of the man who had sat beside the pool at Bethesda year after year, never able to get into the healing waters because no one had helped him. She replied, “We should have thought of this and made sure he was seen, but you see, his mother left him long ago and his father is a picky-picky driver who is gone from sun-up to sun-down. So there was no one to wait with him in line.” She was remorseful I could tell. But I quickly reminded myself she had organized a clinic where hundreds of people had been cared for ---- attention was needed for the boy, but words of appreciation and encouragement were in order for her.

She called a friend over, a pastor in the area who knew of the boy's situation. He explained that months ago the boy's father had taken him to a doctor nearby and had learned there was some sort of neurological disorder developing in the boy that did not allow proper filter of sunlight. He could see better at night than he could in the day. He wasn't in pain, he was just unable to hold his eyes open in the light of day.
And I reminded myself ---- he is a boy whose father is working long hours to try and provide --- he has a father who faithfully returns to him each night. May God bless that father.
I asked who watched over him during the day while his father worked. She waved her arm wide and said, “All the mothers surrounding him”. 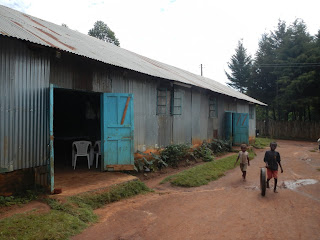 The Pastors were gathering, it was time to focus on why we had come. But the little guy tugged at my heart.

Inside the little tin church there were not lights. Doors opened wide let in the needed sunlight. Many men sat in a large circle and worship began. Breezes wafted through as bird songs dominated the loud voices of worship around us. Just outside the open doors a water spout stood, giving clean water from a deep bore-hole. Children lined up with their assortment of plastic jugs waiting their turn to gather the needed water for the day. These little ones did not have to walk miles for water. They only had to walk to the church each day --- such a beautiful thought in so many ways. And while they waited in line --- they danced to the worship. The children teach us, if we are willing to learn.

Introductions were made, we began to share what God had placed on our hearts, the air inside the stick-pole, tin covered church was wonderfully sweet. We all sensed Abba's nearness. Then as we spoke I noticed movement just inside the doorway. Steve was talking so I was allowed the time to look more closely ----- and warmth flooded me as I realized it was the little boy with the twitching eyes. He noticed my eyes on him, he smiled so sweetly, as his eyes held steady. No spasms or squinting. He sat as peaceful as a lamb, completely still, looking around, smiling.
We talked for the full length of the time requested of us --- almost four hours. And for much of that time the little guy sat inside the nice shaded church. Other children carried water and later played in the distance. But this little guy ---- he stayed nearer the shaded places inside the church.
While his father transports riders on his motor-bike all day, this son finds his solace in the shaded, breezy church.
And I wondered ------------ whose eyes are healthier?

In this world we want eyes that can see clearly in the light of day and we understand we should not be able to see well in the darkness. It's what we expect, what our eyes were “designed” to do, right? But as I watched the little boy who found rest in the shaded church and danced to the worship and sat quietly as if he were a grown man listening to all that was being said inside the church ---- I pondered it all.
To be able to see clearly ---- even in the “darkness” ----- it can be done --- with the Light?

Bats and roaches and leopards come out at night...

Darkness is equated to the evil one's arena in the scriptures...

But where do we sometimes find those who are hurting the most in this world?

Here in Kenya, we have been cautioned by Kenyans that we should be where we need to be by nightfall. An occasional drive home from a rare dinner out is ok, but it should not be often. Here on the “dark continent” (as it is often referred to) it is wise to be safely tucked indoors before darkness comes.

Dark places can be very dangerous.

But, this little boy spoke to my soul, without saying a word ----- “the light is wonderful, but it can be blinding for those in the darkness” ---- “bright light is hard on eyes that have only ever known darkness” ---- so as I live out the Light that I so dearly love and cling to, may I be ever so patient and gracious when I encounter those whose eyes are stung at their first glimpses of the Light.
Without words, a little boy with damaged eyes, can teach me.

In caves not far from our home, elephants journey deep into the catacombs searching for salt deposits. They make this journey at night, in the darkness. During the light of day they graze on vegetation that is life-giving but it lacks the salt they need. So at night they take the journey into pitch black caves, scrape the walls with their tusks and eat the salt they find there. How interesting --- they go searching for salt in the dark...
… I wonder how many living in the light of day are still hungry for more Salt... too many times God's good news is watered down, and the saltiness is too. Or could it be at times there are too many other “spices” offered on the table, when truly only good Salt is needed.

I remember --- my Savior was often found in “dark” places ---- shining the Light and delivering life-giving Salt.

Matthew 5: 13 - 16
“You are the salt of the earth. But if the salt loses its saltiness, how can it be made salty again? It is no longer good for anything, except to be thrown out and trampled underfoot.
“You are the light of the world. A town built on a hill cannot be hidden.  Neither do people light a lamp and put it under a bowl. Instead they put it on its stand, and it gives light to everyone in the house. In the same way, let your light shine before others, that they may see your good deeds and glorify your Father in heaven.