Between a rock and a Holy Place 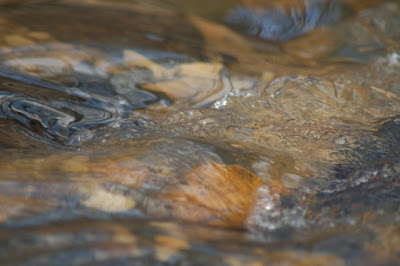 The toughest professors in my most challenging college courses never came close to teaching me at the deep levels of cognitive and spiritual development surrounding me these days. Truly, my rate of growth, only reflects the harsh reality that there was so much i did not know. I've never thought of myself as “highly intelligent”. But i never realized “just how little i knew” until stepping into the arenas where logic doesn't compute and no amount of “want to, try to, hope to, maybe i can if i work hard enough” will make an ounce of difference. When in one place there are innocent little ones being broken physically struggling to get through another day of hunger and pain, but then just a few lines of latitude and longitude traveled reveal the same sort of skin covered innocent ones being emotionally ruined by lavish unnecessaries piled around them.
But always in the back of my mind I remember ---- the Garden of Eden.
Eden was God's plan... His gift... in Eden no one person would have had too much while another suffered without. 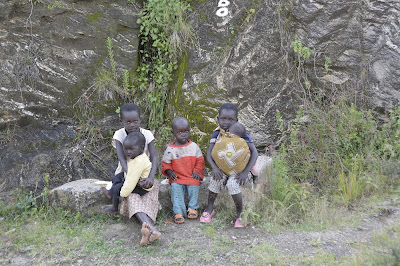 These reflections are not meant to present some magnificent theological finding.
They're just the ponderings of a daughter ... who is … growing.

The scriptures roll through my mind --- “the Lord gives and the Lord takes away, blessed be the name of the Lord”... and I say “Amen”. The Lord is blessed, He is holy and just and loving and merciful. But what of His children?
How often are we acting out “the will of The Lord” in our day to day living?
How much do I act out “the will of the Lord” around me?

The struggle of ---- do I give food to the street children who are ever near me these days. I buy a bag of oranges and give one each to the two boys with jiggered feet and torn, filthy clothes in front of me. And I look at the bag in my hands. And I struggle – missing Eden. Some would actually criticize saying, “don't give them any food, it only encourages them to stay begging on the street”. And I get that point. Others would say, “what would Jesus do, he would surely give them food...”. And I get that point too. Some would say, “just get out of there, come back home to America, where you can avoid the tension, and eat your oranges in peace...” oh God...
I even say to myself, “what are you thinking donna, you're so far away from “home”, from your kids, don't you know you are risking never being near them again with this obedience...”. We aren't suppose to admit things like that are we? But...

Yesterday a pregnant, filthy street woman who looked to be 90 years old came to me as I bought onions at the street market. Oh God!!! her hand is out, she needs help! She carries a little one inside. She's also “mindless” as some of my Kenyan friends would describe it. Dear God, how did her life come to this?? Logic says --- “donna, you can not give her what she needs... you can help her for the next few minutes... but in the end, you can not 'fix' her life...” and this logic is accurate. But... what about the words, “do unto others as you would have them do unto you..”?
In all this tension, this terrible tension ---- my tininess is painfully clear. Like a tiny bush on the side of the escarpment bordering the Great Rift Valley.

Many would say, “oh the problems are just too great, it's too overwhelming, i'll look away or better yet i'll stay far from it, ---- i'll just keep living my life --- and i'll pray for them...” Sometimes it feels like the only possible response to the great need in this world.

But then God plucks a daughter from the peaceful place found at the easier lines of longitude and latitude, and He places her in the middle of where His heart is --- and she stops to hear HIS VOICE.

She realizes she knows too little.

She cringes at the contrast of the two worlds. And He grows her in His ways. “He must increase... I must decrease” (John 3:30) becomes a heartbeat, no longer just inked words on neat white paper. 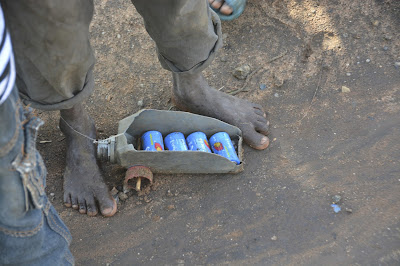 She realizes she's a pebble with many rough edges. She's tucked in with all the other pebbles at the bottom of the stream. The flood waters come rushing over her. She can hardly breathe. Other pebbles surround her, she can endure if they can, right? But then the water somehow plucks her up from the sandy bottom. She misses the comfort of the spot she had always occupied in the middle of those who held her securely in her place. Still the rushing waters have swept her away. She crashes into bigger, unrelenting boulders that line the boundaries of the water's edge. Every collision knocks off a sharp edge on her, an edge that had been unseen by her until the moment of impact. But when the chiseling blow comes, she knows --- that sharpness had been there all along, and it needed to go for her journey down the stream to flow more gently. It's a painful journey down the waterway --- but it's so very necessary. She realizes, while tucked into the sand, the rough edges had not been so evident. The sand could cover up. Only the part that was exposed had felt the rushing waters; and those waters had nicely smoothed the portion that had felt their constant flow. But only when the current had pulled her away did the jagged, sharp, far-from-smooth sides show. The steady stream didn't seem to notice or care, but she did. She knew. She had thought she was smooth... but now her jagged edges protruded and collided. She was being changed, transformed, altered, awakened.
For as she found herself carried by the rushing waters, she was seeing things she'd never seen before. She was impacted by boulders she'd only heard of before. In truth, she had been afraid of the thought of such huge boulders and hoped she might never have to encounter them. Tucked safely in her stream-bottom-sand-bed, she had felt certain she would be safe from them. And yet, she was now learning, the giants didn't break her to pieces, they were only allowed to chip off tiny pieces of the jagged sharp sides she had hoped would never be seen.
She was a pebble being tossed about at the will of the rushing stream. She had no control over her course. Helpless. But.... not hopeless.

She knew as she encountered another giant boulder, she could do nothing to alter it ---- but if she just let the waters carry her through, the boulder would impact her, and she would be changed. What needed to go would be chipped away. If her already smoothed side was the surface that hit the giant rock, she would slide off easily, nothing would chip away. Only the jagged edges would chip away when they hit the giant hard places. 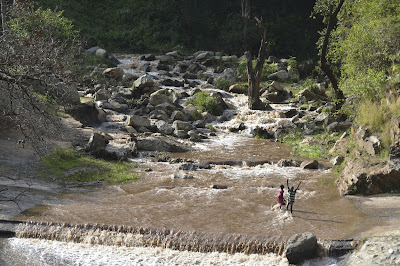 The One who made the stream. The One who plucked her from her safe, sandy bed. The One who was over the boulders and set her course for the journey through them. That One would someday gather her up at the end of her journey, and hold her in His great hands. And He would hopefully be able to say, “oh little one, it's been a hard journey hasn't it? You've been tossed about, but look at you now. You're smooth in my hands. There is nothing about you now that would prick another. There's no side of you now that has not been touched and shaped. The boulders were cruel. Not even I wish for the boulders to be so hard. But since they have chosen to be that way... I have chosen to use them in ways that will bring about my good purposes. For you see, i've been steadily at work to help you. You're heart had cried out to me, you wanted more of Me; you wanted to bless others, not cut them with your sharp edges. So the work began. And little one --- all along the way, you thought you were having no impact on the giant, hard, unrelenting boulders --- but you did. Look back. My rushing waters that carried you through have been working on smoothing those hard places in this world. You alone didn't change them, but the combination of you along with many others like you mixed in with my waters ---- together we've made a difference. Some of the boulders are now many tiny pebbles rushing down the same stream you've just traveled. And some of the cruel boulders are even now being slowly worn down and weakened. Little stone in my hands ---- I will use you and the many like you ---- to transform even the hardest places. You will never understand the hard places, your mind is not equipped to do so. But I do. And i'm at work.

I, God, know the pregnant homeless lady who ripped at your heart yesterday. I know her intimately. You can't change her any more than you could change the boulder beside the stream. But I, God, I will continue to flood my waters over her. She will not have one day that I, God, am not willing to draw near her and smooth away all that is rough and wrong. She might not feel like she has a choice. But remember my Word --- if she will turn to me, she will find me.

You --- just be my pebble.
Allow me to toss you according to my good will ---- your course is not hap-hazard. I chart each turn and curve.
The awareness of all that you do not “know” and the starkness of all that is wrong in this fallen world. The moments of newness that overwhelm you and make you face your intense inability and weakness ---- just be a pebble in those moments and allow Me, the One who is not weak, the One who loves you dearly, the One who is not overwhelmed, allow ME to carry you through.

You just attend to releasing yourself into the rushing waters, let the rough edges be removed, and in the end, I will then allow you to see all that “I” accomplished during your journey. 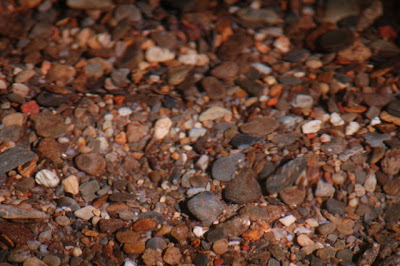