Did she know God was flowing through her?

She laughed, riding on her giggling friend's back. They were full of joy; it overflowed. Walking across a field these two gregarious girls and the woman with them met a short haired woman, walking alone, who was a bit bewildered, needing directions.
She asked their mother for directions, trying to learn the best way to get to where she needed to go.

After receiving the needed help, the small group spoke cordialities of "thank you's" and "have a good day", and walked on. But in the last minute passing, the young teenager did something remarkable really -- something every grown-up could take a lesson in -- she broke the "rules" of sociatal norms and knowingly or unknowingly -- did God-work.
The girl looked directly at the short-haired woman ---
reached inside her and touched her soul as she said,

The woman paused for a moment, stunned. The young girl had no idea what she had just done, she most likely still has no idea. But for certain, her words went deep. Simple words, spoken with sincerity, breathed "life" into the woman who had just 2 days earlier finished her final radiation treatment after an almost 6 month battle against an invisible enemy that had threatened to end her life.

On Feb. 2, which also happened to be the short haired lady's 53rd birthday, the voice on the phone had said the words none of us ever want to hear --- "the test results show, it is cancer..." Life shifted on that day. The weeks and months that followed found her in many doctor's offices, learning what she needed to know, to do her part in fighting the battle. She learned all about which wig would work best when her hair fell out, what foods would work best when her body was depleted, which hospital, which doctor, which clinic, which procedure... She entered into a classroom she did not want to attend and was given the class syllabus for a course she did not want to take.

This beautiful short haired lady is a nurse. She cares for people. She's done so for almost 30 years. She can put an IV into the tiniest hand of a premature baby, she can smile at a sick, pain-filled person in such a way that the medicine becomes secondary to their relief. She would prefer caring for others, than to be cared for by others.

Beautiful was not a word she had indulged in much of late. Living had been her focus.

Her first chemo treatment put her in bed for a day. But within the week, she was back caring for others. They had no idea the lady taking care of them was fighting a battle herself, between life and death. Her hair gave way as expected. We had lunch together that day, then drove to my house, met Maggie, and perched ourselves outside under the great wisteria "tree" to let her hair fall among the thousands of purple flower petals surrounding us. Beautiful was the imagery --- just as God will bring purple blooms again so we would trust Him to restore her hair --- He is the One who makes all things new.
The second chemo treatment brought her to her knees for extended times. She needed the touch of her Father, to quiet the lies of His enemy. Had He forgotten her? Was she being punished? Would He keep His promises to her? Heavy questions. No audible answers came as we prayed together on that carpet, but the Healer was present, and the sun seemed to come up -------- at around 3pm that afternoon.
The third chemo treatment held no new surprises. The hard days were exhausting, but she quickly recovered. She put "Snook" in place (the name she laughingly gave to her wig), carefully applied makeup to help disguise the thinned brows and lashes, and pressed forward. (She is a remarkable lady.)
The fourth treatment was old news. It was the finale hit, it did its work, she persevered, with a firm grip of His robes.
Then came the radiation. Exhausting. Draining. Six weeks of continuing the fight against a hidden enemy by laying still on a table and being shot with radiation. Her body withstood the physical battle, her mind endured the emotional roller coaster.

Last week, she sat at our table; a table filled with food, chairs filled with family, hearts filled with thankfulness, ----- she IS with us.
What a gift it is to share air.

Only those closest to her would have known how unsure of herself she felt that next day. She wanted to look pretty for her husband, they would be outside all day long in the hot Alabama heat to cheer for her sweet nieces as they played ball. She wanted to be free of Snook, she felt keenly aware of the lovely ladies around her, with their stylish hair and fashionable attire. That sly, ugly enemy of our Lord, wanted to make her feel as though the battle she had just endured had left her drained and somehow lessened. He's such a hideous liar, he watches for the weak moments and pounces. Like a wild animal on a helpless lamb.

But wait --- our Lord knows this. And He's not inattentive or unaware. Our Savior knows we are lambs and we need a Shepherd. King David too must have felt lamb-like and in need of a Shepherd when he wrote:
"The Lord is my shepherd, I will not be in want.  He makes me lie down in green pastures, he leads me beside quiet waters,  he restores my soul. He guides me along the right paths for his name's sake. Even though I walk through the darkest valley, I will fear no evil, for you are with me; your rod and your staff, they comfort me.
You prepare a table before me in the presence of my enemies. You anoint my head with oil; my cup overflows.  Surely your goodness and love will follow me all the days of my life, and I will dwell in the house of the Lord forever." Psalm 23

Is it possible that when all the hair let loose from her head, that the anointing oil could cover more deeply? And can a cup overflow, even when nothing looks or even feels right in our world?
Yes - because of the Shepherd.
The young middle-school aged girl who looked at her could not have known the doubt that was pestering the lady.
But the Shepherd knew.
He knew His lamb needed to sense His good pleasure over her, He knew his enemy was prowling near. So, He flowed His words through the twinkling eyes of a teenage girl. He opened her eyes to see the BEAUTY of the lady in front of her. And she opened her mouth and spoke words of life, and truth, and goodness.
Three perfectly timed words ----  "YOU --- are beautiful..."
And the short-haired lady who is my dear sister, --- was deeply moved --- because she felt God's touch through another.

Did the young girl have any idea she was speaking for God and silencing the ugly enemy?
Most likely she did not know ---- but i'm so thankful she let the overflow of her heart SEE my sister, and then have the courage to acknowledge to her ---- "You are beautiful"!
God's work.
Overflow.
...and the enemy lay defeated as the little, cared-for lamb skipped on across the green pasture. 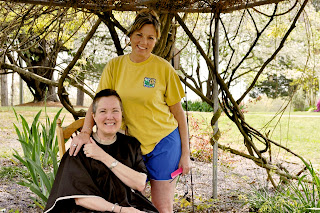 P.S.
Dear Kathy,
I love you very, very much, I'm thankful beyond words for you ------ you ARE beautiful!