Between Heaven and Earth --- High up in the Blue 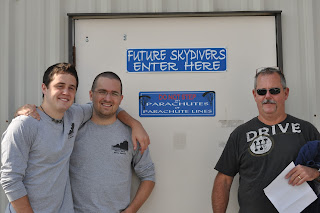 Two Taylor men did something quite odd recently. Some would say it was insanely foolish; some might refer to it as "living-out-loud". Each has their own thoughts but --- logically it was a fantastically nutty thing to do.

The father-son duo, along with my nephew, drove two hours to don harnesses, ride 14,500 feet into the sky, slide open the metal door of a plane, and jump. Reaching speeds of 120mph during the free-fall, they screamed like little boys while gravity did her job.  It was a lifetime-dream of Steve's; it was a milestone for Peter. 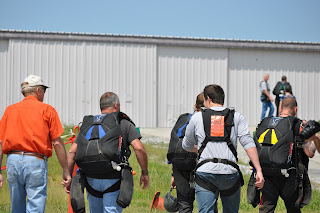 The One who made the sky, the One who created gravity, the One who gave men the ability to make planes and fly them, the One who placed the desire inside (some) people to jump from a plane and slide through the wind ---- that One, held it all together.
With little effort at all, He could have stormed the skies or crushed the plane. Struggling health could have held them to the ground or winds could have carried them away. Parachutes could have deployed wrongly, hearts could have stopped beating permanently.

He has complete control.

We forget sometimes. We think that because we are blessed to see morning after morning after morning... ---- that it will be so again tomorrow. We dully allow our minds to be lulled into thinking sunrises are normal and sunsets expected.
Oh God --- forgive us for forgetting.

But on that day, we were not overlooking the bigness of El Roi (the God who sees us). As if tiny people would even dare to "overlook" the Great One.

As Steve, Peter, and Mitchell willingly jumped from a bullet shaped object 14,500 feet into the huge blue sky ------ something Holy was happening, something spiritual was taking place.

The imagery was unmistakable, the words came clear. Steve was experiencing physically what we both are experiencing spiritually.
We are doing the illogical.
We have jumped.
We are free-falling --- waiting on the parachute to open and glide us down safely.

I was sitting at the feet of the Robed One that day just as vividly as if i had been sitting in a summer time, small town church revival. Dare i say --- perhaps even more so. God holds "church" wherever He likes --- He is not limited by the walls built by men.

Our youngest son Peter, has been maneuvering through waters navigated by most young men these days. Rapids, with boulders lurking at the shorelines. Falls, with raging, paralyzing drops and currents that sweep trees down like toothpicks, dashing them into careless boys who find themselves in deep waters. He is learning --- God is His teacher. He loves God and wants to wake up to Him at a deeper level. So Peter listens to the Teacher, but sometimes the Teacher has to get his attention in firm Teacher like ways.
On this day when he would fall through the sky back to the ground, we wondered how it might rest in his soul. These types of experiences can speak loudly for many years.


As the expert tandem guides were readying the parachutes, Steve noticed on young man pausing, kneeling, gripping the chutes with both hands and pulling them close to his chest. With closed eyes, he moved his lips. Covered in tattoos, with quarter sized ear gauges and piercings glimmering silver where only skin was expected, he could have been an imposing presence. But when he turned his eyes towards us, we knew. He knows our Abba -- gentleness swirled with confidence in his gaze. I thanked God for His bigness, for letting me feel Him in the young man's presence, for sending His "colorful" sentinel to pray over the guardians of gravity.
Names were called out pairing novice jumpers with experienced tandem guides.

As Peter's name was called the sentinel raised his hand --- they were to jump together into the blue.


Steve and Mitchell were also paired with experienced guides. All was well.

I talked with Abba, much. I wasn't afraid --- just attentive. Excited for them, enjoying their boy-like eagerness to explore the un-normal.

They received their instructions, tightened harnesses, and trekked up the hill to the runway. Plane engines came alive, they climbed inside. Within seconds rocks flew backwards in the wind gusts from the propellers and their feet left the ground.

How oddly familiar it felt to me. As we prepare for the launch to Kenya --- it's very much the same.

- We receive our instructions, but we don't fully understand.
- We need to be "harnessed in", it would be deadly to jump if not harnessed to the One who knows what He is doing.
- We willingly walk to the thing that will lift us off of what we have always known. But we do not walk alone. The Expert is with us.
- We sense the illogical reality of what we are doing --- but the compulsion to continue rules us.
- We sit quietly during many of the details, we can't fly the plane, we have little actual "control".
- We realize few are truly "with us" --- they have not been called/told to board the plane and jump in this particular way.
- But we sense that those whose feet will remain here on this ground -- are praying for us diligently, and in that way we are not "alone".
- We do not have to jump ---- we could refuse. But what a sad choice that would be --- much would be missed.
- The harness that constrains us is intensely important. It needs to be tight, almost painfully so. For it will hold us securely to the only One who knows how to land us where we need to be.
- Straining against or arguing with the Expert on our back will not stop the jump, it will only lessen the beauty of the experience.
- The ride will be like nothing we had imagined before it began.
- The One on our back might be scary looking, but He is solid and sure.
- After the free-fall, comes a painful jerk ---- but then a slow ride will bring views never seen before.
- When you jump ---- only ONE is near.
- Many who choose not to jump, won't care to hear about it -- you will want to share, but will feel rejected sometimes. It's ok, there are many who are looking skyward, watching the One on your back.
- The view is so vast from so high up --- it would be easy to get lost and land in many dangerous places. But the One directing the chute's sky-path, knows exactly where He wants to put you down.
- When you land --- people care. And sometimes they even celebrate, because you have finally arrived.

Steve was the first one out of the plane, then Peter, and then Mitchell.
Before Peter jumped, the colorfully tattooed young man securely tied to his back, placed his hands just above Peter's broad shoulders and silently prayed. He had asked permission first -- his words to Peter were, "Dude, don't freak out if you look back and i'm praying over you, it's just something between me and God, it's what i do to carry you through. You down with that?" "Yes sir", "Awight man, let's do this". More was given to Peter that day, than a jump from the plane. He got to see God in another --- he got to feel God near.
All three had the ride of their life --- and seemed to keep "flying" for hours afterwards.
No broken bones, no bruised knees, no regrets. 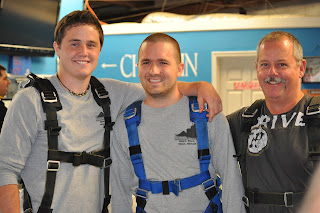 I wonder sometimes ---- if we stay too firmly "planted" in what is familiar and comfortable and safe and manageable ------------ will regrets sneak in during the 11th hour of our breathing.
"Everyman dies, not every man really lives." -William Wallace
Since God is the Giver of Life, doesn't it seem that He should be the One who defines it?

Later that same night, Steve showed me a torn, worn piece of paper. He had carried it deep in his pocket when he had jumped from the plane. On the paper, he had written ---

we do this to enrich our lives

and to cast ourselves

"And he took the children in his arms, placed his hands on them and blessed them." Mark 10:16 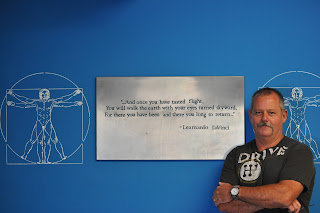 ©2012 Donna Taylor/Reaching for the Robe