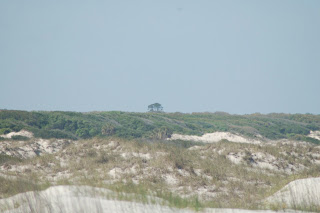 It rises above all the others, completely exposed to the winds that blow hard across the tops of its fellow trees. I sat watching it for hours, wondering how much i could learn from the silent sentinel if God were to allow it to speak to me.
I believe God teaches us constantly in everything that surrounds us. There's a lesson He can give through the dirty sidewalk, the grassy field, the nesting mother bird, and even the towering lone tree.

Steve and i were back on Cumberland Island for our annual runaway to this quiet place. We embraced the reality that this could be our last trip --- moving to Kenya breaks the cycle of "annual" plans. It's another thing to lay down. After all, how much can two arms and one heart hold on to. He's calling us to "more" in another place.
With no computers, no cell access, no technology, few people and only wild horses running about for an occasional distraction ----- this island is a haven for "hearing" His still small voice. 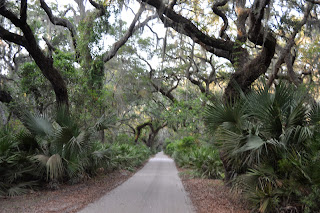 From my perch on the beach, it felt as if the tall tree on the horizon was speaking -- and it had much to say to me. Beside me was my Steve. As i pondered the distant tree, He had pulled his "Sword" (as he calls it). I was so moved. God, the maker of the roaring ocean beside us --- speaking to me through a tree --- as my husband poured through His unchanging Word.  Oh how i love the way our Abba meets us. 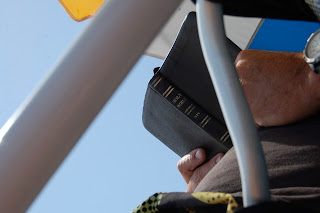 All the trees surrounding the tall one, were warped and twisted under the constant winds that blow off the ocean beside them. They seemed to almost mass together, perhaps in an effort to offer support to each other. I saw myself among those twisted, tightly woven trees. How comforting they must surely be to each other.
When the winds come, they can hold each other up.
When the darkness comes, they stand together, not alone.
When the rains fall, they will share the life-giving waters,
and when the sun warms their chilled leaves, they will all shimmer together. 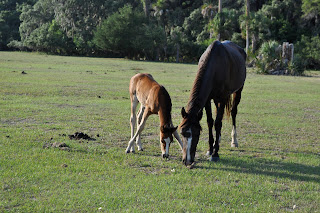 There's such comfort in companionship ---- even among bark covered brothers.
We forget don't we. We are all so very much like each other. The trees all have roots, they need sun and water, they are covered in bark and they all produce leaves that hang on their magnificent twisting limbs. We too all have roots, we need sunshine and water, and we're covered in the same tender skin. We might be wounded, we may have scars, but hopefully our "limbs" are still reaching up towards the Giver of Life. Limbs can reach higher it seems when fellow limbs help ease the blows of life.

Intrigued by the tall tree, i wondered what its message could be. How could the image of the towering loner bring a message to my soul from the One who made us both. 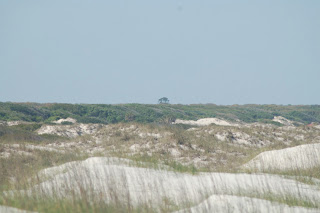 The tree was like those around it in almost every way --- except that it had been created to be uniquely different. Its top branches waved high above those surrounding it. It was not tall because of anything it had done in and of itself, it was tall because the Creator made it that way.  And because of this...
The winds that came sweeping in from the ocean currents hit the taller tree in a different way. There was nothing blocking the full force of the winds on the towering limbs of the tree. But, the tree could hold strong because the tree's root system was supported by the roots of the trees surrounding it, and those many connecting roots held it firmly in place. So while the winds hit hard and the tree may have felt alone, it was not, it was surrounded and held by the embrace of those around it.
And it struck me, if the tall tree had eyes, it would be able to see both the sunrise and the sunset from its high vantage point. It could see both sides of the island. No storm would surprise the tall tree, no boat landing on shore would go unnoticed. The tree was in a position to see "more" because its line of vision was not caught up in the many branches that surrounded it. Did the ability to see farther make the tree more special? No. It simply meant the lone tree saw things those near it did not. Did the taller tree think the other trees were wrong for not seeing the same things it could see? Surely not. Each tree had been given its position by the Creator,and each tree held tightly to the one nearby it.
If the taller tree were a person, would it feel alone in its uniqueness? Would it feel left out and odd? Nothing about the tree evoked that sort of thought. Instead it looked strong and secure, held in the "arms" of its closest companions.
Oh how i wish all people were as good to each other as trees...
Oh how thankful i am for those who are...
Oh how i wish i were a better "tree"... 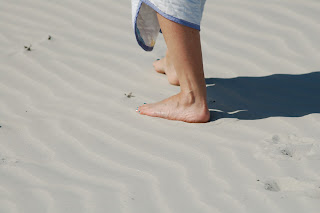 The trees on Cumberland are known to be some of the most beautiful trees in all the world. Nathanael Greene, Thomas Carnegie, Light-Horse Harry, and Joe Kennedy are just a few of the famous names who have found themselves drawn to them. Perhaps they too caught sight of the tall tree surrounded by the strong trees holding its roots in place. Perhaps, the silent tree encouraged them as well.

Growing strong in the place and for the purpose we were planted does.

... and if we happen to be blessed with companion trees surrounding us, then we'll find ourselves strengthened when the hard winds blow. 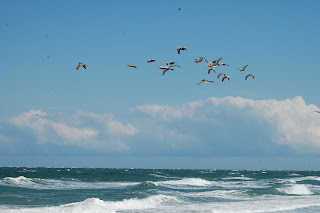 My memory verses for April ----

Jeremiah 17:7-8
“But blessed is the one who trusts in the LORD,
whose confidence is in him.
They will be like a tree planted by the water
that sends out its roots by the stream.
It does not fear when heat comes;
its leaves are always green.
It has no worries in a year of drought."