From High Banks to Gullys 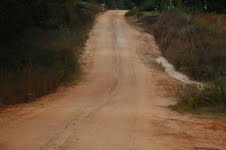 Steve and i walked down a dirt road this past weekend. Perhaps where you live, there are still many dirt roads, but where we live (for now) they have become a memory of our childhood. Funny --- moving to Kenya will feel like "home" in some unexpected ways --- with it's dirt roads and rolling dust clouds behind passing vehicles.
As we walked, i felt that stirring --- there is always more to be seen than what is right in front of our eyes. If we are paying attention, we can see "much".
The dirt road was lined with nice deep ditches and high, weed covered banks. But there was one spot in the high bank that had been washed away ---- and there is where i felt the reminder.

Please don't think it trivial or too "simple" to see the magnificent in the mundane. It's an art God will grow in us if we pursue Him. God wants to reveal Himself to us, individually, personally, in ways that will ALWAYS line up with HIS WORD. God wants to be more intimate with us than just a Sunday morning preaching or a quick devotional here or there. He wants to meet us in those places, yes, but He also wants to be so close that He can meet us on a dirt road, or doing laundry, or in falling leaves. The key to seeing Him is to rest in His Word (we must know what He "looks like" in order to recognize Him), and then watch, be ever watchful, for Him --- because He is everywhere and in everything.

So Saturday, i found my Abba whispering to me when He turned my eyes to the washed out gully on the bank of a country dirt road in Alabama.

The high banks traveling alongside the dirt road seemed to almost frame it ---- the ditches allowed for good water flow after heavy rains. But in this one spot -- the high bank had washed away and the resulting mini-ravine had been transformed into a trough where the water flowed down. 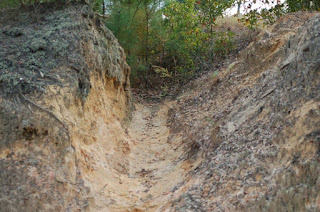 This part of the bank obviously had a weakened place in it, which allowed for the washing out that had re-constructed it completely. When we have a weak place in us --- the best answer is to run to the One who is strong and let Him reconstruct us there. Weakness is not always bad ---- in God's hands it can be used for great things. He can and will completely rework us --- so that in the end we will look and behave VERY differently than before He touched our weakness.


As a result of the waters "reworking" of this section of the bank --- this portion looked completely different than the ground around it. The ground on either side of the washed out trough stood high and was covered in old dirt, scraggly weeds, and even spider webs. While it stood tall and maintained it's height over the washed out gully, the ground looked parched and old, weathered and cluttered in a tangle of weeds and webs.
In contrast the washed out gully had nothing old or weedy clinging to it. It was slick and clean. Colors shown from the underlying dirt that had now been exposed to the light of day. Stones that had been tucked in below the surface now shone and glistened in the sunlight. If the washing out of the high bank had not happened, the colors and sparklings would have been forever hidden under the surface.
How much like the washed out bank are we? I felt a silly kinship with that old gully.
Years ago, when the pressures of the heavy rains of life proved too much for my high banks, my weakness could hold back the waters no more --- and the crusty, dried, weedy-web surface of me began to wash away. It gushed down the side of my shored up hillsides and once the flow began, there was no stopping it. I began to realize, i no longer looked like the banks beside me, my walls were torn down and i was "exposed". Perhaps those around me didn't notice it so much ---- but my Abba and me --- we knew, we knew.
Everything was changing. It was painful in some ways and wonderful in others.
I had no control of the flood waters that flowed down and tore away at the old me. The rush of cleansing waters had begun --- i was being washed away ---- i was being redefined --- i was seeing things in me that had been hidden for so long --- things were beginning to glimmer and shine --- that had been overlooked and covered. People can not do that for themselves. The bank can not make itself wash away. Only the flood of water can do it. And with people --- it takes the flood of Living Water.
I had grown WEARY of the being a bank. I knew there had to be more than the high walled dirt covered view. And so i asked for the flood of water to wash me away and redefine me into something that could be used for good. Whatever is good, true, honorable, right, excellent, of good report ----- "God, could i have a dose of that and perhaps become a dose of that for others?..."
And so --- the flood of rushing Water came down.
It washed away what was familiar to me.
It carved away at the weakest places until it hit solid ground beneath.
The Water found a pathway of least resistance and it flowed.
Things were exposed. Things were washed away. New things sparkled in the Light.
The Water can flow more freely now and reach the depths below more quickly --- because of the washing away of the bank that had previously been in the way.


Silly --- yes ----
but i felt a tugging in my heart towards the gully wash in the bank beside the old dirt road. 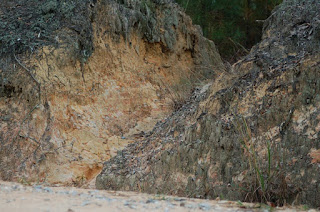 
Are you a high bank still? Or perhaps you're feeling washed away.
Are you being redefined? Are you beginning to see things under the surface you never knew existed inside you? Do you feel "different"? Unsure about what's next because you've never looked or felt quite like this before? 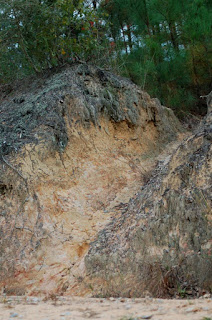 Just take a look at some of the magnificent "gullies"
created by His hands ---
with rushing, cleansing waters.

If our God can create masterpieces in the soil with water ---- imagine what He can do in a soul...


This gully girl surely is thankful the high banks at the center have been washed away.

Psalm 51:2 "Wash away all my iniquity and cleanse me from my sin."

Isaiah 48:6b “From now on I will tell you of new things, of hidden things unknown to you."

Photos taken by Maggie of Antelope and Grand Canyon, Steve of dirt road and gully in Alabama