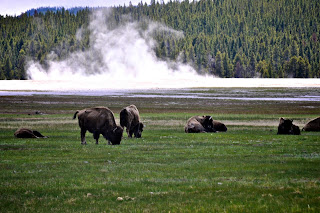 Oh how i do admire the buffalo.
BUFFALO --- what in the world could buffalo have to do with our journey with Christ or reaching for His Robes???
Hang in there with me --- there is a definite, meaningful, very worthwhile connection - i promise.

Silly i suppose -- but this animal has so many qualities that are far advanced to many people we know. Just watching and studying this mighty mass of muscle and fur gave my mind time to contemplate the ways this small minded, huge animal might actually have much of life mastered.
The buffalo is steady and unwavering. He knows what he needs to do each day, and he will not be deterred from it. He grazes for about 2 hours and then rests to chew his cud. Then he will move to another place and graze again. But the details of his day are not what intrigue me most --- it's the "way" in which the buffalo moves about and reacts to the world around it that speak volumes to us larger brained, less steady mammals. 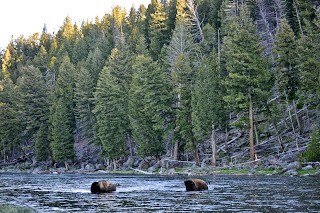 One morning as Maggie and i were driving out of Yellowstone's West entrance, we were held in rapt awe as two huge beasts crossed this massive, fast flowing river. The animals were completely unhindered by the madness of the waters that rushed around them. The waters whirled and would have brought certain harm to any lesser of a creature. But with the buffalo the waters had no choice but to give way and find a new path to flow. The buffaloes were unrelenting as they took each steady step. They had their eyes set on the shore ahead, they were not bothered at all with the strong current or slippery river bed. They knew where they were to go, where they needed to be. They knew what they needed to do to get there ---- and so they simply pressed their strength, flexed their muscles --- and moved ahead.
The river's sound alone was intimidating to us girls perched safely on the shoreline. But not the buffalo. He was unaltered and unaffected. His determination was beautiful and inspiring. He would change His course for no one or no thing. He was having to work hard --- it was not an easy trek. Steam blew from his nostrils as he pressed his muscles to obey his mind. He moved forward steadily, no hesitation, no pausing to reevaluate his decision, no double checking the speed of the river or his need to cross it. He pressed on ---- it was inspiring and beautiful and spoke volumes to me without a word being uttered. He knew what he was suppose to do ----- and so he was doing it.

Am i oversimplifying here ---- i think not.
Rather -- do we all too often complicate simplicity --- most assuredly.

Our Abba sends us constant messages and encouragements --- even through the mighty mute buffalo. But perhaps the "rushing waters" of our life deafen our ability to "hear" the message being sent to us from above. 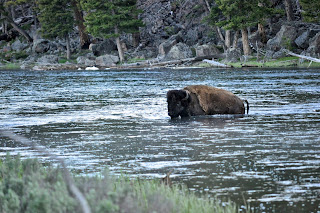 i sat in wonder as the buffalo silently spoke to me --- with his example ---
"Where is your focus donna?"
"Where are you preparing to go?"
"What needs to be strengthened in you -- for the journey ahead?"
"Strengthen that part."
"Don't look a the size of the river or listen to its rushing waters mocking you."
"Listen to the voice that will carry you through to the other side."
"Don't listen to those who want you to cross the river of their choosing
or even stay on the "safer" shoreline."
"Listen to the voice of the One who cared enough to call out to you --
the One who will strengthen you --
the One who has a purpose in you being at the shore of His choosing." 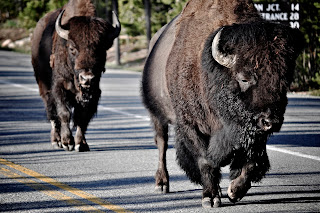 As the buffalo made his way up out of the waters --- he was unaffected that we were watching him. He gave us our space to do what we needed to do --- but he was not budging from his purpose. Amazing.
Oh i know --- his real purpose was likely to get to his next favorite grazing spot. Even makes me laugh a bit at myself that i see such depth in the movements of a buffalo. But --- the thing is --- I'm watching and listening --- and my Father knows this. And so He can and will speak to me in ways that match up with His Word and His Ways.
And only God --- GOD --- can use a buffalo's movements to encourage someone needing to be encouraged.

This mighty creature - was almost hunted to extinction several years ago. Hunters wanted its meat and hide; they were killed in mass numbers. I'm reminded, when the buffalo was being hunted, what did it do? It ran.
When Saul was trying to kill David, what did David do? He ran. (1 Samuel 19 & 20)
When Jezebel planned to kill Elijah, what did he do? He ran. (1 Kings 19)
The buffalo could have turned and killed the lesser creatures chasing it - easily. David could have killed Saul, on numerous occasions. Elijah could have called down fire from Heaven, he'd done it before. None of them did the harm they could have done. They ran. They "turned from" the harm intended for them, they did not "engage" with their enemy --- under God's guidance to them that day.
Hunters no longer pursue the buffalo, and we know how it all turned out for David and Elijah.
Still, we would be wise to remember, that in our everyday, normal lives, there are those who would like to "kill" us -- perhaps not with weapons we can see --- but rather with their words. They carry a bow and arrow crafted out of syllables and the target is our mind. They'll wound our heart too - if they can get a good shot in. When the Bible speaks of "murder" it is not simply referring to the ending of a physical life. There are many ways to bring a sort of "death".
The buffalo, David, Elijah would remind us -- to run --- and guard our hearts and minds in Christ Jesus.
The buffalo teaches us --- to remain steadfast in our purpose -- and not be hindered by things only meant to distract or harm.
There is much to be learned from the buffalo ---
One last little whisper that came to me from the big bison as he passed by ---- he had water dripping from his chin hairs and his winter fur was hanging loosely from his new spring growth of shorter hair. He did not care at all "how" he looked or what i or anyone else thought of him. He was not primped and pretty ---- not polished or pumped ---- he was woolly and wet --- and absolutely breathtakingly magnificent. The way he looked actually had nothing to do with "the way he looked". He was powerful and inspiring and mesmerizing in his mighty single-mindedness. But as he passed close by the car -- i could see his eye --- just feet away --- his round, brown, sincere, eye --- 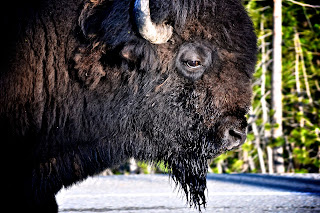 Oh - how i do admire the buffalo...
"Don't get off track, either left or right, so as to make sure you get to where you're going. And don't for a minute let this Book of The Revelation be out of mind. Ponder and meditate on it day and night, making sure you practice everything written in it. Then you'll get where you're going; then you'll succeed. Haven't I commanded you? Strength! Courage! Don't be timid; don't get discouraged. God, your God, is with you every step you take." Joshua 1:1b (the Message)

Photos taken by Maggie in Yellowstone National Park
Posted by Donna Taylor at 4:55 AM