Being Redone by the Redeemer 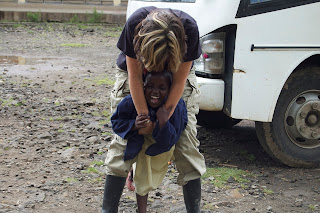 It's interesting how the movies can neatly pack into 120 minutes or less, the purpose, the reason, the "why" of the main characters life. Last night Steve, Mike, and I watched a wonderful movie called "The Spitfire Grill". It was filled with mystery and intrigue mixed with a gentle flow. No shoot'em up scenes or wild car rides, but rather it progressed at a steady pace and revealed the purpose of one young woman's existence.
I confess, that at the end of the movie, I was a bit envious.

She had not done anything huge in the eyes of the world ---- but she had changed the world in the place where she was.
If it had been a true story -- her name would have been unknown to the masses. But to the few who did know her, she left everything better than it was when she found it.
What a beautiful legacy.
A beautiful legacy that came from a hard life.
I felt God in the movie --- for only He can bring beauty from ashes.

It is exhausting to live in this world according to the "world's unwritten rules". Then God reminds me, I am not of this world. That in this world we will have trouble. This is not our home. We do not belong here, we are simply passing through. I'm thankful for those reminders.

In 120 minutes the movies can reveal the purpose of someone's existence. For us, it takes a lifetime. So in that "lifetime" of journeying what are the things that really, really, really matter most?
Is it our income?
Is it our fashionable home?
Is it our style and class and impressive appearance?
So many of us would quickly say --- NO --- it's none of these things.

But then why is it so many still clamor for them. Do you see it too? The words we speak and the living out of those words do not always match up. But it can be hard to recognize that inconsistency. It can be hard to see. It's not an pleasant sight at all.

God tells us in His Word --- what matters most, is that we love Him and love others.

The girl in the movie last night loved those around her - more by her actions than by her actual words. And she was so very beautiful because of it.
Eyes were soft and gentle, hands were steady at work, words came slow and were measured, and she could carry all her possessions in one backpack.
She was beautiful.

Can you tell I'm being re-sized, re-fitted, re-done ---- by the Redeemer?
And He is gently saying to me --- "measure it all up according to My Word donna ---- then move forward with the parts that I tell you mean the most to me".

Sounds simple enough right?
It's not.
But, it is a cleansing that goes soul deep.
I wonder why -- what's ahead.
Well, at least maybe I'll be fit and lean for the journey. In Jesus' Name.
I'm not thinking I'll be changing the world ---- but I pray I can leave the world around me better than it would have been without me. Wouldn't that be sweet...

... "to bestow on them a crown of beauty instead of ashes, the oil of joy instead of mourning, and a garment of praise instead of a spirit of despair. They will be called oaks of righteousness, a planting of the LORD for the display of his splendor." Isaiah 61:3


(photo taken by Steve in Kenya, of Dori laughing with me)
Posted by Donna Taylor at 5:17 AM