I know this looks dangerous... but... it's really not. 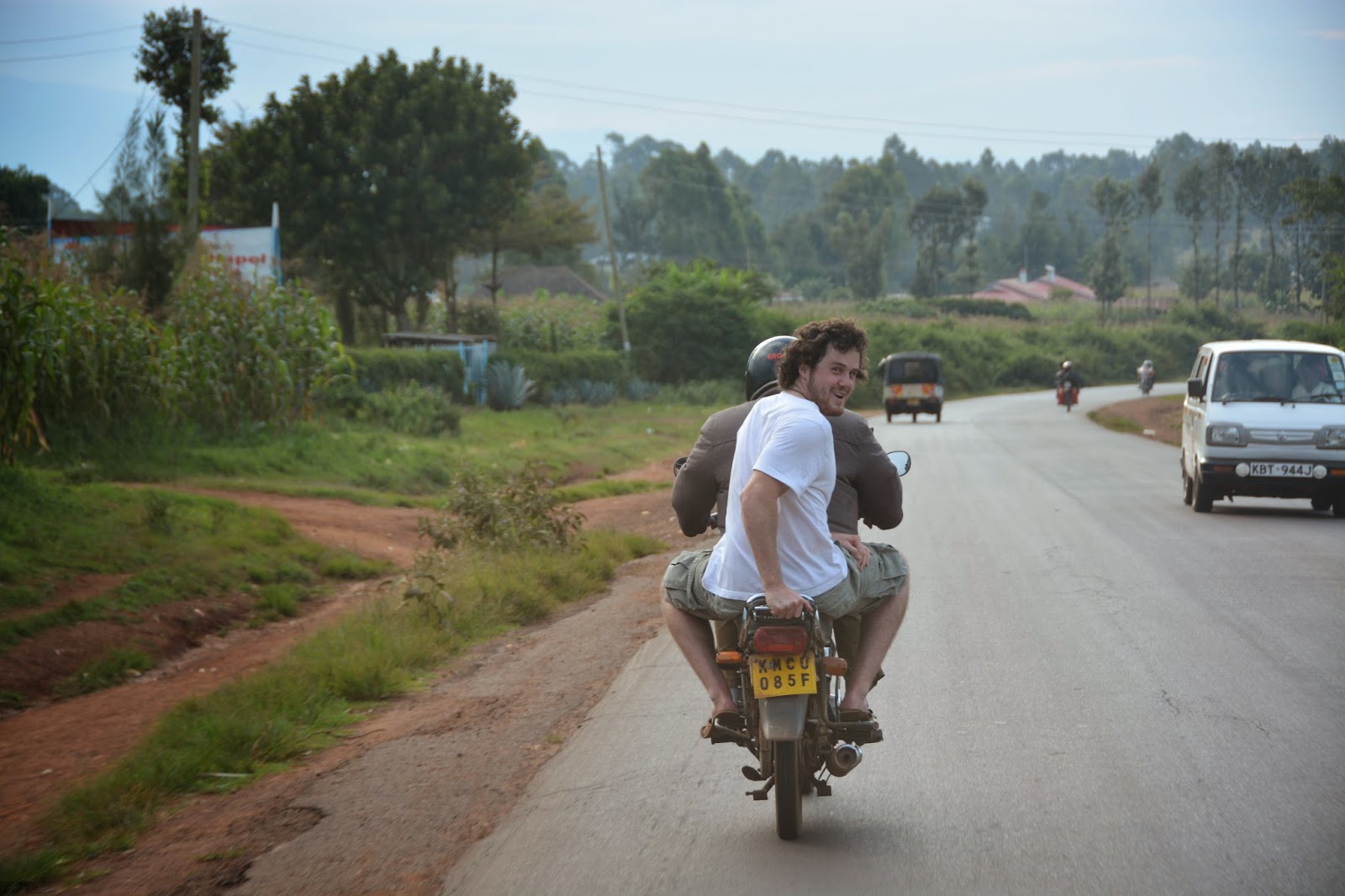 Still laughing over that man of mine's words...
We're headed down one of Kenya's many treacherous roads when the black fumes boiling out the tailpipe of the slow moving truck in front of us presses us to either pass or suffocate. Then out of no where an eighteen wheeler moving far too fast for the weight it's carrying passes the car headed in our direction. And within seconds, we find ourselves barreling head-on towards the mass of metal surely 10 times our size. My favorite fella' then calmly says, “Honey, I know this looks dangerous... (as I hold my breath and grab the handgrip in front of me)... but... it's really not.”
Cool and calm ---- he smiles and maneuvers our Lori-car masterfully, tucking us securely in the safety of our lane with seconds to spare.
The intensity of the moment followed by the desired result ( safe passage) caused us both to erupt into boisterous laughter. That nervous kind of JOY laughter that comes when air flows back into previously emptied lungs.
And I repeated his words back to him over and over again as the madness of the drive on these unruly, hole-filled, donkey/sheep/goat/cow framed roads continued.
We've learned to laugh.
We've also learned to drive in new ways. (Very careful, defensive ways.)
You have to.
And, we pray more than ever before.
Truthfully, it is dangerous to drive on these raucous, unruly Kenyan roads.
But when he said, “I know this looks dangerous... but... it's really not,” it sent my mind on a journey of its own.

We waited at the bottom of the escalator, behind the two ladies and three little girls. Unsure of why they were hesitating, we inched closer. The ladies were talking in swift swahili trying to encourage the little ones to step onto the moving stairs, but the girls were terrified. And I thought to myself ---- “Honeys, I know this looks dangerous... but... it's not.”
We smiled with a look of reassurance as we slowly stepped around them and showed them what it looked like after taking that first daunting step. With big eyes, they watched us ascend, and then slowly brought their round eyes back down to the unnaturalness of moving stairs.
Making our safe passage up to the next level, we looked over the high railing to encourage them on. And they did it, they took that first step. We cheered, they cheered, fear had been beaten and the ride was underway.

After Bible study time with the ladies in the slum, the rains were threatening and the thunder rolled. We knew the ladies would get soaked through and through as they walked back to their huts so far from the place where we gather each Friday, so we offered to carry them home instead. It's comical really, how many Kenyan ladies you can pack into one vehicle, especially when trying to beat the rains. As they filed into the car, it left no room for our son, Peter. But he soon found a solid solution, he would ride on the back of a friend's motorcycle who planned to follow us home to borrow a book. We looked at the looming clouds, listened to the angry rumbles, and prayed. There was no other option really. We couldn't strand the ladies as they carried babies on their backs and little ones in their arms. And our mostly grown son was all up for the quick ride through rushing traffic under threatening skies. Letting go and trusting the One who loves most, it's a must, not an option. And it came to me later, “donna, I know that looked dangerous... but... really it wasn't”. Not because of the logical conclusion or measured risks involved, but only because of the nearness of God and His great care. 1 Peter 5:7 in the Message translation sings to me in those moments, “Live carefree before GOD, HE is most careful with you.”
(note: the Word does not say we should live carelessly ---- but rather “carefree” AND before God)

These words are being typed while sitting in the Amsterdam airport. Just days prior we'd received another warning was sent out to Americans living in Kenya, a warning from the US Embassy, cautioning Americans to be alert and aware, terrorist threats had increased.
Eleven hours ago I let go of my Steve's hand, hugged Peter tight and stepped through the security gates of the Nairobi airport. And I whispered to myself those same words, “i know this looks dangerous... but... it's not.” Even though the Embassy had warned of the potential danger, I reminded myself of the Truth (live “carefree” before God --- He is most careful with you).

Things around us can look treacherous and ominous. Our Lord even tells us straight up --- “in this world you will have trouble...” We shouldn't be surprised when it comes. It's not a matter of “if” it's soundly a matter of “when”.
But we people, we try to control the percentages very closely. I've lived most all my life trying to manage the possibilities carefully --- to try and keep the opportunities for trouble slim and manageable (if at all possible).
And i've learned that I can stay inside controlled parameters and minimize risk, but then i'm rarely in the places where God wants to touch and speak and share and love and help and be – through me.

Stepping into places of intense, known danger on our own, without God's cover and guard ---- well, that's NOT what i'm talking about here at all.
There are places we are simply not suppose to be, things we are not suppose to do.
For each of us, those lines are defined differently ---- and they should be, according to why we are here, what God has purposed in us.

But we should never, ever forget ---- “we are fearfully and wonderfully made” – and there's a reason for that gift.

There's a wide swing here between scared and hiding --------------to looking for danger and running full speed into it.
And somewhere in the middle of that God-held swing is a sweet spot where we breathe air designed for our lungs to inhale.
It's not the stale, stagnant air found in boxes that hold us in. Likewise it's not the treacherous, oxygen-void air found in the heat of the fire or heights of the atmosphere we were not designed to endure.
But instead, it's the aroma filled air in the wide open spaces of obeying and being exactly where the One who made us has called us to be.

In the eyes of the world, it could often be said, “That looks too dangerous...”
But if God is with us ----- doesn't His Word say ----- “who can be against us”.
Do we believe that? Or is it just one of those verses we use when it fits with what we might be trying to convey at the time? Is it a verse of convenience? Or His Word for our daily bread?

These words don't flow out of me with some sideways agenda to try and get people to step into dangerous, adventurous places. No. These words come out of me as I daily reach for His Robe and say, “Oh Lord, I feel too weak. It might be easy-peasy for other people to fly all over the world alone and drive on crazy roads so far from home. But you know me, i'm Your little girl, and you know it feels a little odd (and dare I say a bit crazy) for me to be found in these sort of places. So, I have to be honest Lord, with you, and say, i'm holding on to you with everything i've got. Cause you know Lord, to my eyes, this looks like it might be dangerous... but i'm hearing your still, small voice whispering in my soul ----- 'Yes donna, I know this looks dangerous... but... with me... it's not.'”

And so, like the little girl at the bottom of the escalator, i've watched others step into the unnaturalness of places that seemed wildly dangerous to me. And i've seen them move to new places, higher places, with smiles on their faces and peace in their eyes. And i've heard you calling from above, looking over High rails in the Heavenlies and encouraging me on. So day after day, i'll keep stepping where you tell me to ------- thankful beyond words that ------ I always find you there in those illogical, unnatural places (where stairs should be still, but they are moving instead) ---- doing the things that can only be done by You.
… and “in my weakness, you are oh, so strong.”
Thank you Lord.