Bones in the Mountain 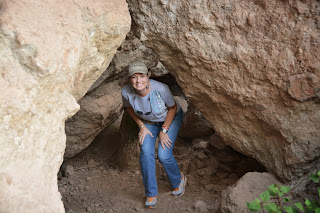 A short drive from Kitale town rises impressive Mt. Elgon. Mountains seem so mighty, like majestic, unmovable giants. When living in Georgia, Steve and I would “run away” to the Appalachian mountains. There's a sense of Godliness when sitting atop something created by Him that proves our tininess. How like God it is, that after moving us all the way to Kenya, He places us beside massive Mt. Elgon. He knew of our love for tall mountains and quiet nature, He placed that in us.
Nature here is quite different than that of the Blue Ridge Mountains in North Georgia. Black bears are replaced by leopards, deer by antelope, horses by zebras, and cattle by water buffalo. Oak, pine, dogwood and poplar trees from home are dwarfed by the massive trees growing in this wild land. Acacia trees decorate the mountain side while dense forests are filled with nandi-flame and baobob trees. Black and white monkeys dance through the high limbs here while black and white skunks hold fast to solid ground back home.
The mountain was formed by volcanic activity millions of years ago. The same earth shifting movements that shaped the Great Rift Valley also pressed the mountain up into the sky. Caves formed over time as rushing waters eroded softer soil, but water was not working alone. Elephants discovered salt in the walls of the caves on Elgon. 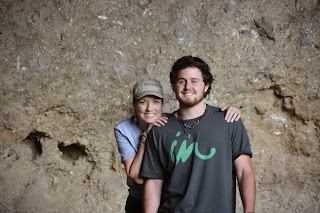 No one knows for sure how long ago the elephants began excavating for salt, no one was there to witness their initial digging. But great tusk scrapings can be seen on the cave walls and ceilings of Kitum Cave, the elephants have “owned” the caves for longer than men have visited them. Crystals are embedded in the walls, alongside salt deposits, bat perches, and spider nests. To step inside the caves of Mt. Elgon ----- one can't help but be visually reminded of our small “vapor” like existence.
Last week we returned to the mountain, thankful for the chance to visit a place that is controlled ONLY by God. Men seem to have their hands on almost everything in this world. Even our churches are managed by skin-covered-clay-vessels. Stepping into the wild places created and controlled by Abba --- there's something much akin to Holiness there.
As we drove through the muddy, wild, winding roads underneath the massive trees that dwarfed us, we came to a trail leading to Chepnyalil Cave, a place we had not yet visited. A short hike up a sharp incline carried us to the waterfall beside the cave opening. Wildness all around, we were transfixed by God's beauty. Staying ever alert, we were watchful as we stepped into the mouth of the cave. These places are not tame; they should be approached with respect. The dank, musty smell of the great vertical hole in the earth is the first to greet. But then immediately we notice the huge boulders that have fallen from the cave ceiling above us. No walls are shored up or supported, we walk cautiously. Next our eyes see drawings on the wall --- or are they fossils? We aren't sure. 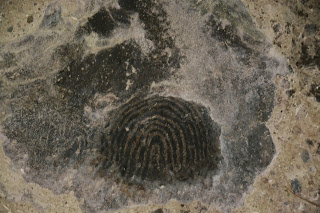 I crawl up the slanted cave wall to touch the marking, there are no grooves, they seem to be drawn, but not with an ink that will rub off. I sense that what I am touching is old, very old. Am I touching something that was touched by another 10 fingered person --- millions of years ago? Or perhaps it was just last week? But, I think of the scripture, “...ask for the ancient paths, where the good way is and walk in it, and you shall find rest for your souls.” Jeremiah 6:16... I know what I am touching is “ancient”(but I will receive not directions from it's lines). There is a sense of awe and wonder in the air of this musky cave as I look around me. My skin shivers when I begin to grasp what my eyes are actually seeing ---- huge, old, ivory protruding from the stone walls and ceiling over my head. 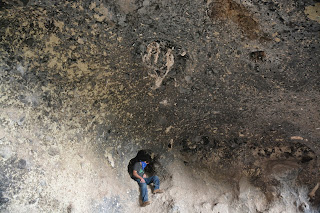 Bones... ancient bones... bones large enough to carry massive creatures... they surround me. No signs are posted, no guides or museum curators are present. Just these massive white messengers whispering to me. In their silence I still hear... “I use to walk about like you, I use to breath and move as you do ---- but now, i'm silent and still ---- just as you will be someday.
I was overcome and speechless (if you can imagine), and yet squealing with excitement all at the same time. Overhead was a grouping of bones that most surely could have come from something the size of the dreaded T-Rex. We walked further and found more bones... a huge jaw-bone with teeth still set into it, teeth that spoke of fierceness and danger, but held still above me. My imagination was overwhelmed. A hole in the cave ceiling presented lacy fern frond fossils. 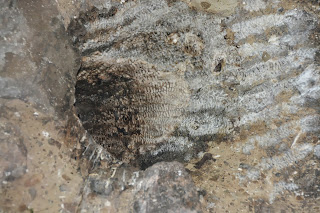 It was mesmerizing --- so loud in its silence. We climbed up on the massive boulders, careful at first, then more bold as we felt their solidness underneath us. And my dear Steve said ----- “What could have caused these huge pieces to fall from so high above us? Surely it was an earth shaking of some sort... I wonder if they could have come crashing down on the day Jesus was crucified and the earth shook in darkness?...” 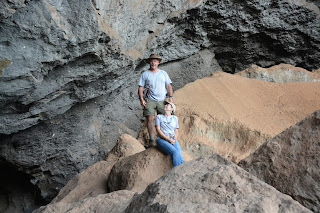 Imagine...
The reality that where we were standing had once been visited by huge animals created by the same God who created us, and the earth had shifted and now held their mighty bones tightly in stone before us, and these bones were tucked into their rock blankets long before Christ walked under the skies above them... it all felt so Holy.
So many had been born, lived, and died between the breathing of these huge animals and the breathing of me... Abraham... Ruth... Noah... Moses... David... Christ... … …
The brevity of our breathing days is undeniable.
There is much to be done, many to be loved, more to be given, but ---- there will always ONLY be ONE to be worshiped...
When my bones lay still ----------- will it have mattered that I took up space and breathed air? Most of all, will I have worshipped the ONE by the way I lived?
The Alpha and Omega was here before the bones of the cave carried muscle ----- and He will be here long after my bones lay silent and still.
May they move while they can, for good, God-honoring reasons... until...

Hebrews 11:32 – 40
And what more shall I say? I do not have time to tell about Gideon, Barak, Samson and Jephthah, about David and Samuel and the prophets, who through faith conquered kingdoms, administered justice, and gained what was promised; who shut the mouths of lions, quenched the fury of the flames, and escaped the edge of the sword; whose weakness was turned to strength; and who became powerful in battle and routed foreign armies. Women received back their dead, raised to life again. There were others who were tortured, refusing to be released so that they might gain an even better resurrection. Some faced jeers and flogging, and even chains and imprisonment. They were put to death by stoning;they were sawed in two; they were killed by the sword. They went about in sheepskins and goatskins, destitute, persecuted and mistreated—the world was not worthy of them. They wandered in deserts and mountains, living in caves and in holes in the ground.
These were all commended for their faith, yet none of them received what had been promised, since God had planned something better for us so that only together with us would they be made perfect.