Ten Minutes Before the Game 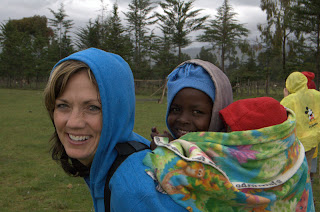 The first wave of "memories in noun form" have left our home now.

For the past two weeks we've been working to pull them out of their stored away places and display them for their next owners. Baby shoes, picture frames (with sweet pictures removed), dishes from my grandmother, old tools from Steve's grandfathers, baby bouncy seats and a gazillion toys.
As we pulled out all these "treasures", my emotions ran away from me. There was this sincere sense of obedience and excitement, knowing these things belonged to someone else because our call was to leave all and go. But there was also an overwhelmingly intense walk down memory lane as i touched each item that had been held by those in this world i love deeply. Toys my babies had played with, ceramics my mother in law had made, vases she had used to placed flowers on my table, dishes my grandmother had placed her biscuits on, i could feel little baby hands last week again and smell my sweet grandmother again. It was as if i sat in a room alone with the fragrance of them all, it was a deeper level of surrender. One i was ill prepared for, but an undeniable part of my path of obedience.

Tears still sting my eyes as i type ---- but all is well with my heart and soul.

So last week, i reached for His Robes with a very shaky, unsure hand. I couldn't quite get a good grasp, i needed help.

And help came ---
I had to run to the store to pick up a few items, and Mike, our oldest son, offered to join me. He doesn't typically hop in the car for a trip to the grocery store with his mom. :) But he had witnessed my red eyes and felt my weakness and so he offered to come along and help --- i was thankful for his companionship. As we rode along - he asked me to share with him how i was feeling, he wanted to better understand. And so, God bless his heart, i unloaded my "grief" and he listened intently. I shared all with him, even that i was embarrassed to be feeling so weak. The "daughter of God" named Donna, was excited to take this step of obedience. The regular old Donna was weeping over the flushing of things that had been touched by precious fingers. He said not a word as i shared ---- and then when i was all done ---- he said,

"Mom, i don't want to over-simplify how you're feeling, but i believe i can truly relate, i think i completely understand.
And he began---
"You remember when i was in high school, how i LOVED to play soccer."
I nodded. He went on, "I mean i really loved the game. Everything about the game, the running, the hitting, the roughness, the sweat. I loved it all. And the tougher the opponent was, the more i loved it because it made me dig deeper and give more. The harder they hit the harder i hit --- and i loved it. On the field, i loved the game.
"But the ten minutes before the game --- no. I HATED the ten minutes before the game. I hated everything about it. I hated the warm ups, i hated the feeling in the pit of my stomach, i hated the peanut butter sandwich my coach made me eat, i hated the way i wanted to throw up after that last swallow, i hated the testosterone filled attitudes, i hated it all. Most games i wanted to run to the locker room put on my "normal" clothes and head for home. But i didn't.
"Because the second that buzzer sounded and the game was on, i LOVED IT. Everything changed at the sound of the buzzer. The game was on - i was prepared.
Then he said ---- "You'll be ok mom. You're just in the ten minutes before the game. And all this is a part of preparing you for when the buzzer sounds.  Mom - i know that when you step onto the field, you're going to love it, you're going to be prepared for the opponent, the harder the hits that come, the harder you're going to hit back. Mom, you're just still in the ten minutes before the game."

My soul cried and i thanked God.
He was right -- Mike, my son, spoke with wisdom. I was in the ten minutes before the game.
Then he told me how much he loved his father and me, and how thankful he was to be our son. He said many more things that will never leave this mother's heart. Things that will never need to be sold at a garage sale.

And i pledged to Michael --- and to my Lord --- once again --- that I will NOT run to the "field house", put on my "normal" clothes and head for "home". I will stay at the edge of the field, choke down my peanut butter sandwich, endure the stretches, and listen intently for the "game on" buzzer. In Jesus' Name, i will not cave in on the sideline. I'll tighten my shoe laces.

Then ---
God reminded me of how many times during the 10 minutes before Mike's games his father and i had held hands up in the stands and quietly prayed for Mike.
i realized --- i had not let anyone know, i was in need of prayers. I was trying to maneuver through this pre-game "stretching" exercise and was struggling -- i needed prayer cover.
God reminded me of His scripture --- Rejoice with those who rejoice; mourn with those who mourn. Romans 12:15 And it struck me, how could anyone mourn with me over the physical loss of these memory filled treasures --- if i did not let them know i was mourning?
(Perhaps i'm bad for needing to mourn the loss of them - i wonder if Hannah Whitall Smith or Elisabeth Elliot had these same moments of tearful surrendering or if i'm just much, much weaker than others called to leave home and serve. Regardless - it's the raw, transparent truth about me --- oh how i love my Father's Grace.)
So after we got home, i typed up a quick email and sent it out to a few close friends. Humbly confessing my weakness and asking for prayers.
My hand was reaching ---- i was beginning to feel the brush of His Robes.

That evening my sister and brother in law came to our home, along with two gentlemen for Steve and two dear girlfriends for Maggie and me ---- they helped us organize, price, arrange, and feel strengthened for the next two days. We laughed and giggled as the stickers went on. It all felt "ok" now -- they were there with us. I could feel, literally feel, the prayer cover arriving. Dear friends who ran to the Father on our behalf, met our Father halfway down the pathway as He was on His way to answer. Beautiful ---- the Body of Christ.

When one part of the body feels weak ---- the Father will send other parts of the body to help.

We need each other. We must have help. God designed it that way. We can do nothing on our own ---
but --- "can do all things through Christ who strengthens..."Philippians 4:13
And Christ reminds us over and over again in scripture ---- we are a part of the Body of Christ.

Nothing we accomplish for God can be done without God.

So, for those of you who know me best, i always work to simplify life. And Mike simplified the next several months for me beautifully ----
we're in the "ten minutes before the game".

Last week --- i "choked down a dry peanut butter sandwich" -- and then was able to wash it down with a cool cup of water given us by the many who came alongside us.

We're waiting for the "game on" buzzer together... and oh --- yes,
i can feel His Robe in my hands again.

"If you are willing and obedient,
you will eat the good things of the land"... Isaiah 1:19

"Let us not become weary in doing good, for at the proper time we will reap a harvest if we do not give up. Therefore, as we have opportunity, let us do good to all people, especially to those who belong to the family of believers." Galatians 6: 9-10

Photo taken by Steve in Kenya of little Faith Cherono riding "piggy back" on my back, with her new teddy bear tied to her back. When the children at Tumaini received new teddy bears from Aeropostle, the girls immediately tied them to their backs, just as the mothers of Kenya tie their babies onto their backs.
This was one of the moments God used to propel me towards the "ten minutes before the game". Faith Cherono is tiny, but she is already on the "field". It's a hard field for a little girl to be on --- i want to be there for her.
Posted by Donna Taylor at 7:13 AM