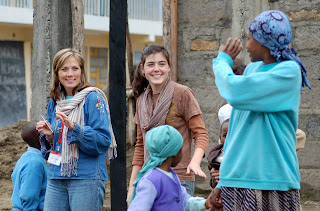 (If you have ever felt rejected and not wanted ---- this post is for you. i hope you know, or soon come to know, the way your Father sees you. You are beautiful and wanted ...)

There once was a little girl born to a family. She was the second daughter to rest in the arms of a mother who had hoped to present a son to her husband this second time around. But alas, the gift from God was another daughter.

Years have surely altered the words a bit, but still the impact of them nested in the little girl's soul. For sometime in her growing up days, it was shared with her that on the day of her birth, her mother uttered words of rejection, saying something like, "another daughter, well that's like having two pairs of brown shoes, who needs two pairs of brown shoes...". Words spoken by a disappointed mother who would still care for and grow the child --- but words revealing the desire to have something other than what God had sent.
(I'm reminded - that while this may sound so sad - and our hearts may be inclined to rise up in defense of the daughter and against the mother --- we must ask ourselves the question -- "have i ever received something from God that was not what i wanted?" "how did i respond?" -- so we won't cast a stone at the mother -- we will remember we have been very much like her perhaps. The words of the mother are NOT what matter most here. It's the response of the Father that we focus on -- He always brings beauty from ashes - as only He can.)

The little girl was a carefree child who had a way of feeling God's love over her; she felt Him in blue skies and kitten fur, in sweet grunting sounds that puppies make and the cuddled up closeness of her favorite dog. She felt God come to her in dreams and breezes, and she knew ---- He liked brown shoes.

As she grew, she came to understand, that in the swirl around the words spoken at her birth, God was at work, but so was the enemy of her God.

The enemy worked effectively to whisper to her heart, you're not special, you were not what was wanted, you'll never be, don't try.
But the Father came to her in quiet whispers of hope and assurances that He had good use for brown shoes.

As she grew into a woman ---- she came to realize, that Christ, God's Son, her Savior, ---- had surely worn a pair of brown sandals.

Old brown shoes had covered the feet of her Savior when He had walked among men.

In God's hands,
the little girl,
knew the beauty of being
---- just another pair of old brown shoes.

For her Father knew the plans He had for her...


"I (John) baptize you with water for repentance. But after me comes one who is more powerful than I, whose sandals I am not worthy to carry. He will baptize you with the Holy Spirit and fire."
Matthew 3:11 (NIV)


Only HE can use old brown shoes in beautiful ways ...

And the little girl clung to the Father...


Photo taken in Kenya of Maggie, Zipporah, and me.
Zipporah has eleven siblings. Her mother passed away, she was then raised by her father and step mother.  Maggie carried shoes to her for several years. Students at Maggie's high school raised funds to pay for Zipporah's education to become a seamstress. She is a beautiful young woman, who now works as a seamstress in Kenya.